Lady Eagles shape up for season 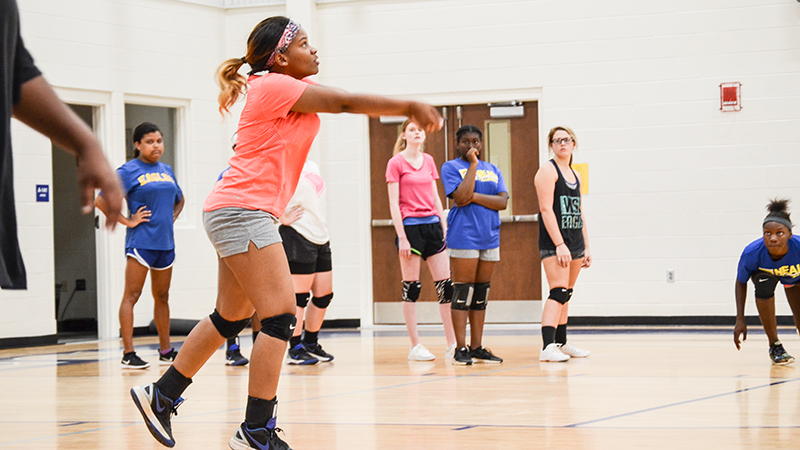 The W.S. Neal volleyball team will tip off its season at home versus Northview Aug. 31. The upcoming season will be the first under head coach Megan Donald.

Last year the Lady Eagles finished 10-4 overall. The team was 3-0 in the area to win its first title before advancing to the playoffs where they lost in the first round.

The team will continue without its star player Dinah Samuel, who graduated last year.

Donald said the team has shown a lot of growth since she took over as coach.

“We started out just learning positions,” Donald said. “Last year they rotated a lot at positions. This year I want them to focus on one single position. The first few days was good chaos. Now it’s a little more organized. We’ve learned the rotation better. We’ve worked on calling the ball and calling our hits. Communication is the most important thing to me right now, and getting them to work together and talking to each other,” she said. “We’re still working on it. My motto is ‘If the ball hits the floor, there should be a body on floor’.”

Donald said positions are still being decided, but has a good idea about where certain players fit well.

Frasier, Gillam and both Askews look to see time at the hitter positions.

Pugh and Ball are shaping out to see time at the setter position, and Crapp the middle. So far, no libero has been decided.

The back row for the Lady Eagles is still in the works, according to Donald.

The Lady Eagles will be joined by Monroe County and Escambia County. Last season, WSN dominated its area. Donald said she’s not sure of the outlook of the area this season.

“In Baldwin County we didn’t play any team on the schedule I have now,” Donald said. “My plan is to go in blind and just play the game. We can only control our effort and how we play.”

Communication and effort is at the forefront of the Lady Eagles focus heading into the season.

“I expect a 110% every game,” Donald said. “If we win a game it’s because everyone worked together. My main focus right now is team chemistry. They’ve worked hard all summer since we started practicing on conditioning. The effort is there, and that’s what I expect during the game.”