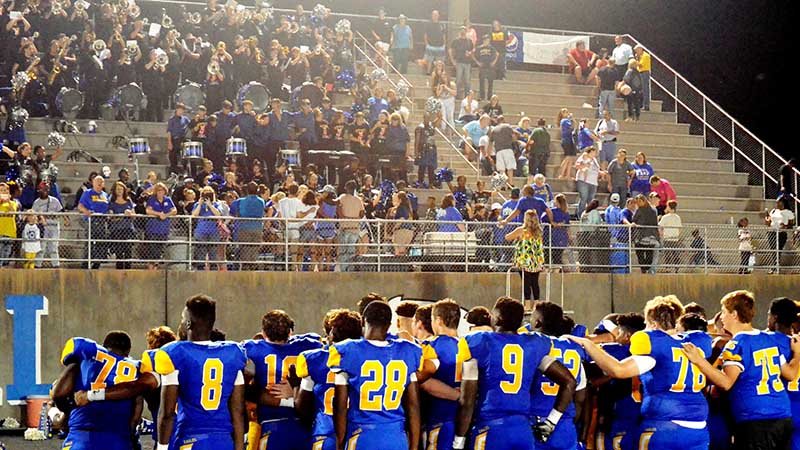 The Eagles salute the crowd after the big Homecoming victory over Calhoun. Travis Tessandori| The Brewton Standard

The W.S. Neal Eagles won its Homecoming game by a final score of 67-0 over Calhoun High School, Friday. The win marked WSN’s 12th straight over Calhoun, dating back to 2005.

The game started with a safety and ended with a field goal by the Eagles, and there were a whole lot of touchdowns in between those two plays.

The safety came on just the second play of the game, as a bad snap ended up in the Neal end zone and the Tiger quarterback laid on it, making the score 2-0.

After a Calhoun kickoff, it only took the Eagle offense two plays to add another score. Junior Matthew Thomas connected with senior Jacobey Hawthorne for a 43-yard touchdown pass to push the Neal lead to 9-0.

Following a Neal fumble recovery on the ensuing Tiger drive, Marvin Maddox punched in a 12-yard touchdown run. A missed PAT left the score at 15-0 Neal early in the first quarter.

The defense forced a punt, before Thomas connected with Hawthorne for the tandems second touchdown of the game, this time for 44 yards.

With a 22-0 lead and 1:53 left in the first quarter, the Neal defense  forced a turnover on its own 3-yard line, allowing Thomas to run in his third collective touchdown of the game; a 1-yard gut punch up the middle extending the Eagle lead to 29-0.

The Tigers were finally able to pick up a first down on its fifth drive, at the start of the second quarter.

The onslaught would continue throughout the remainder of the second quarter, as Maddox tacked on his second touchdown, this time for 54 yards.

A 36-0 lead grew after the Eagle defense forced a three-and-out and Hawthorne returned a punt 35 yards for a touchdown.

The Eagles took a 43-0 lead into halftime, where the coaches agreed to play the third and fourth quarter under an eight minute running clock.

It didn’t take long for the Eagles to expand on their lead after Samuel Bosarge took helm under center. One minute into the second half, Bosarge connected with sophomore Amon Craig for a 36-yard touchdown, and an extra point put them at the half-century mark.

Calhoun’s first drive of the second half ended in a punt, which was blocked by freshman Isaac Bonam and scooped up by Jennings Hobbs for a second defensive score by the Eagles.

Neal forced a fumble on the ensuing drive, before Bosarge ran in his second touchdown, giving the Eagles a 64-0 lead.

The Eagles spent their final drive running out the clock, before Tommaso Bartolucci made his first field goal of the game, leading to the final score of 67-0.

The 67 points scored by the Eagles are the most they have put up in a single game since 2014, when they scored 81.

Thomas finished the game 2-2 with 87 yards and three total touchdowns (two passing, 1 rushing.) Maddox added on to his touchdown total with two more, giving him seven on the year. Bosarge also added two touchdowns of his own.

Head coach Andro Williams was happy with the outcome, but wants his team to learn how to take the same mentality into each week, no matter the opponent.

“It doesn’t matter who we are playing, we have to be the same all the time,” Williams said. “We are still learning to have fun, but you never know when it could be your last time playing this game. The mentality shouldn’t change based on your opponent, it should come from within.”

W.S. Neal moved to 2-2 on the season with the victory, and will travel to class 5A Carroll High School this weekend.

Carroll is currently ranked fourth in the most recent class 5A rankings, and they hold a 4-0 record.