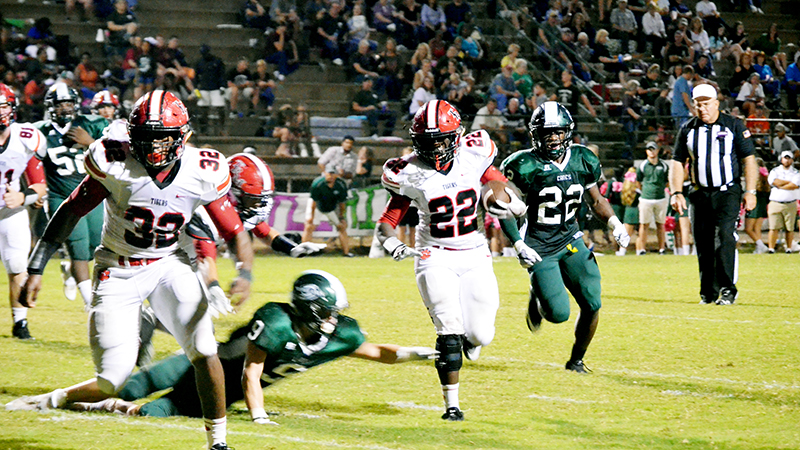 Narkavius Campbell had one of TRM’s five touchdowns. Travis Tessandori | The Brewton Standard

It was a packed house in Flomaton on Friday, as the short road trip for the Tigers resulted in plenty of Tiger fans in attendance. T.R. Miller received scores from five different players, and sent fans home happy with a 38-26 victory over the Hurricanes.

The first three quarters were all Tigers, as they jumped out to a 38-6 lead.

The Tigers’ defense forced a punt on Flomaton’s first three drives of the game, giving the offense time to bust out of the gates.

DeMarquis McMillan was the first Tiger to find the end zone, when he took a hand-off around the left end for 17 yards, untouched. Matthew Morgan tacked on the PAT to make the score 7-0, TRM.

McMillan would set up the second score later in the first quarter with a couple of big runs. Joshua Jolly punched it in this time with a 2-yard quarterback keeper that he took up the middle. Morgan connected on the extra point to make it 14-0 TRM with 2:27 left in the first quarter.

TRM’s third drive took about seven minutes off the clock in the second quarter, as they had some bruising runs and third and fourth down conversions that led to a 34-yard field goal by Morgan that put the Tigers ahead 17-0.

Flomaton would finally get on the board on its final drive of the first half, connecting a 59-yard pass from Da’quan Johnson that landed in the hands of the receiver, who took it the rest of the way. The extra point was missed, sending the game to halftime at 17-6.

The third quarter entailed three Tiger touchdowns and two Hurricane turnovers that would give the Tigers a commanding lead going into the fourth.

TRM opened up the half quickly, with a big kick return by Jalen Walker that set up Michael Campbell’s 8-yard touchdown run. Morgan was good again on the PAT to put the Tigers up 24-6.

On the Hurricanes ensuing drive, a big loss on a play by defensive linemen Ricky Samuel led to a third down heave that Jolly leapt high in the air for, coming down with the ball and giving possession back to TRM. Two long McMillan carries set up a 6-yard touchdown by freshman Narkavius Campbell. Morgan hit again to make it 31-6 with 8:16 remaining in the third.

It was TRM’s other freshman running back, Darius Webb, who would be the fifth Tiger to score on the night. After Michael Campbell had a physical 21-yard run, Webb would punch in a 5-yard run. Morgan was good on the extra point and the Tigers led 38-6.

Flomaton took to the air in the fourth quarter, and TRM had a couple costly fumbles that gave the Tigers a little scare at the end.

Johnson would hit on his second touchdown early in the fourth quarter, a 24-yard connection that the receiver made a great play on. The lead was cut to 38-14 after a successful 2-point conversion.

Trying to put the game away on the next drive, the Tigers went for it on fourth and one and fumbled at its own 45-yard line, where Flomaton took over for another scoring drive. A third and 17 conversion later led to a 6-yard touchdown pass. A failed 2-point conversion kept the score at 38-20 with 5:36 remaining in the game.

Flomaton would recover an onside kick and find the end zone just minutes later on a 28-yard connection. They failed the 2-point conversion again, leaving the score at 38-26.

The Hurricane offense marched down the field and faced a fourth and one from the TRM 4-yard line, before an incomplete pass would end the threat.

The Tigers would then run the clock out, thwarting the comeback threat, 38-26.

In a game that was chippy for and physical, Flomaton picked up seven penalties that resulted in 101 yards for the Tigers.

TRM’s defense stepped up on big plays, only allowing Flomaton to convert on third downs two out of nine times.

The Tigers will look to keep up the momentum as they take on region opponent, Bayside Academy this Friday. Bayside is currently chasing TRM in the standings.