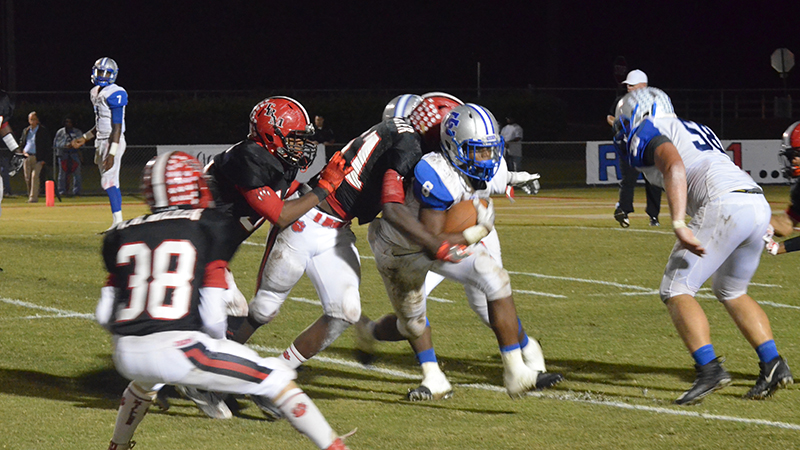 T.R. Miller went into Friday’s game against the Clarke County Bulldogs with control of its own destiny. With a win, they would advance to the playoffs, a loss and a Bayside Academy victory would mean missing the playoffs for the first time in 33 years.

The worst happened for TRM, as Bayside defeated Flomaton and shortly after that the clock struck zero at Brewton Municipal, where the scoreboard showed a 27-17 final in favor of Clarke County, eliminating the Tigers from playoff contention.

The Tigers turned the ball over multiple times for the fourth consecutive game, with one interception and one fumble.

The first turnover came on the opening kick, where a questionable no-call cost the Tigers’ its opening possession. The kick was short, and the receiver signaled for a fair catch. Upon catching the ball, he was hit immediately and the ball squirted loose. A Bulldog defender fell on the ball, and the refs signaled that it was the Bulldogs’ ball.

Clarke County would capitalize shortly after with a 20-yard touchdown on third down by running back Caleb Taite. The extra point was missed and TRM trailed 6-0.

TRM would threaten on the ensuing drive after a 26-yard hook up from Joshua Jolly to Demarquis McMillan. A third down incompletion at the Clark County 38-yard line would force a punt, which Hayden Atkinson would pin down at the 1-yard line.

A three and out led to a punt, which the Tigers would block. The deflection rolled out to the CC 24-yard line, and the Tigers would take advantage of the special teams’ play. After an offside penalty, Michael Campbell took the first play 19 yards to the end zone. Matthew Morgan’s extra point gave the Tigers its first lead, 7-6 with 5:25 left in the first quarter.

The next Bulldog drive went for 83 yards, and took six minutes off the clock. The Bulldogs converted on third and long twice, and fourth and short twice before William Foreman broke free for a 23-yard touchdown run, giving the lead back to CC, 13-7.

Matthew Morgan would hit a remarkable 44-yard field goal on the Tigers next possession to cut the lead to 13-10 with five minutes left in the half.

TRM would try to take full momentum by going for an onside kick. After recovering the kick, another questionable call would give the Bulldogs the ball back. The refs ruled that the ball was not touched by a Bulldogs player, while the TRM coaching staff plead its case, to no avail.

The drive pushed into the red zone, but an Orlando Gandy sack on first and goal helped lead to an incomplete pass on fourth down at the TRM 14-yard line, sending the game to halftime.

Clarke County came out of the locker room hungry, taking the first play up the gut for 57 yards to the red zone, before Austin Kinsey took a handoff around the left end nine yards to give the Bulldogs a 20-10 advantage.

The teams swapped punts, giving TRM possession with four minutes in the third, looking to start a comeback. After losing nine yards on the first two downs, Michael Campbell threw a pass downfield that was intercepted and returned to the Tiger 28-yard line.

Shortly after, Rashon Horn connected with Markeith Williams for a 28-yard touchdown pass to extend the Bulldog lead to 27-10 late in the third quarter.

TRM would fumble the following kickoff, and the Bulldogs would recover. Ricky Samuel came up with a huge strip sack at the TRM 32-yard line to again give the Tigers a chance.

The Tigers would pick up seven yards before being stuffed on a fourth and three to give the ball back and end any chances of a comeback.

A late 30-yard touchdown pass from Jolly to McMillan would cut the lead to 27-17 with a minute and a half left. The Tigers attempted an onside kick, but the Bulldogs recovered. The quarterback took a couple of knees as the Tigers watched its playoff hopes dwindle to zero.

As a team, the game marked the first time this season that the Tigers did not pick up 100 yards on the ground, only accumulating 93. McMillan collected 72 of those on 12 carries.

The Tigers did collect a season high 128 passing yards, getting 83 from Jolly and 45 from Stokes Jennings.

The effort was not enough as the Tigers will not see a playoff game for the first time since 1983.

The Tigers are now 5-4 heading into the Battle of Murder Creek, looking to avoid its first .500 or lower season since 2007.