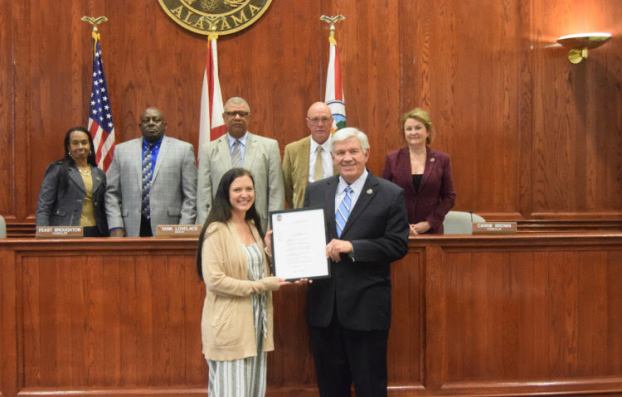 Mon. Megan Brantley was honored by the City of Brewton for her service to the city. Standard photo/Barrett Edge

Brantley was commended for her service to the city “as the creator of the Brewton Mural and as an entrepreneur and promoter of culture and the arts in the city.”

Brantley told the council, “I am so honored. It is cool to see so many people take pictures there.”

In new business, O’Bannon Park was approved to be used by West End Reunion from noon until 6 p.m. on Memorial Day. Next, the council appointed the voting delegates to the Ala. League of Municipalities Convention. Joe Watson was named first delegate, Feast Broughton, first alternate, Carrie Brown, second alternate.

The council also approved the Surplus and Authorize Sale of 3520 Hwy. 31 N., along with a service agreement with O’Kelly Architecture,LLC.

According to the resolution, O’Kelley Architecture, LLC anticipates that the construction budget is plus or minus $450,000.00 for the modification of said building located at 1010 Douglas Ave.

Finally the council heard from Guest Speaker Chelcy Green in regard to vaccinations and a recent study conducted by University of South Alabama’s Mitchell Cancer Institute with Dr. Casey Daniel. “We have been working in the Brewton, Atmore, and Flomaton communities since last summer to promote the upcoming School Based Vaccination Clinics,” said Green.