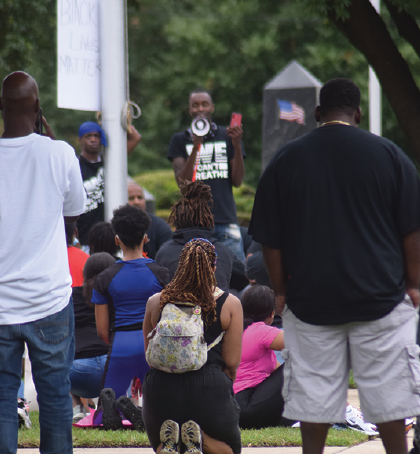 A peaceful march and rally took place on Sat. in Brewton for the Black Lives Matter movement.

Gathering at the John L. Fisher Community Center, members of the community congregated together before marching to the Escambia County Courthouse. Sparked by the police killing of George Floyd in Minnesota, the Brewton demonstration was one of many across the state over the weekend. At the event, each individual held signs and chanted together. “I can’t breathe,” or “No justice, no peace,” were a few of the cries heard on the streets of Brewton that afternoon.

Marching down Belleville Avenue to the courthouse, approximately 60 protestors gathered around the flagpole. Included in the protesting group were many concerned citizens, the Brewton Fire Department, Escambia County Sheriff Heath Jackson, Mayor Yank Lovelace, and Brewton Police Department Chief Monte McGougin. Arriving at the courthouse, the group knelt for 8 minutes and 46 seconds, representing the length of time Floyd’s neck was pinned on the ground. During this time, Josiah Nettles spoke to the group, emphasizing the need to work together. “It takes all of us. We’ve got to stick together,” said Nettles.

Leading the chant the entire way to the courthouse was Tiffany Barton. At the rally, Barton spoke along with Caneshia Redfearn, organizer of the peaceful protests that took place downtown last week. Together, the leaders emphasized the need for the change within the community, state, and nation.

Before closing, Rev. Dr. H.K. Matthews spoke to the crowd. A veteran of the movement, Matthews marched with Dr. Martin Luther King Jr. on the Edmund Pettus Bridge in Selma. “First of all, I must say how proud I am of these young people that have gathered this afternoon,” said Matthews. “I didn’t come to speak, I came to stand in solidarity for those of you who are here and say to those who are mistreating us, ‘Get your knee off of my neck.’”

Expounding on the need for change, the 92-year-old reverend said, “I say to all of us today who are gathered here black and white, ‘I am sick and tired of being sick and tired.’ I have been the victim of racism not only throughout America but in this city in some how and someway. I am saying to those that oppress us, ‘We ain’t gone take it no more.’”

Closing with a quote from MLK, Matthews said, “Dr. King use to say to us all of the time in meetings, ‘If a man has not found something for which he is willing to die for, that man is not fit to live.’” 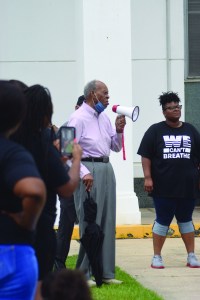 Southern Pine Electric Co-op is warning customers about scam calls. “Unfortunately, there are some people out there calling Southern Pine... read more