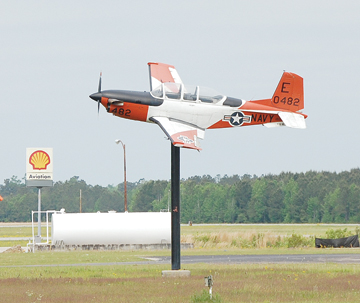 The main topic of discussion was a contract between the City of Brewton and the United States Navy to lease the Municipal Airport real property for the next 25 years. The Brewton City Council meeting took place on Monday, July 13, at the Municipal Court.
A longtime relationship with the U.S. Navy, the city’s contract of 25 years ended in June, and according to Municipal Airport Manager Earl Lambert, the U.S. Navy wishes to reinstate a new 25 year contract.
“Twenty-five years ago about a month or so we ran into a situation at the airport,” said Lambert. Explaining the difficult situation at the time, the airport was at risk to losing two of the three runways at the facility. “We had 2 left that were 1 mile. 150 ft. wide. The FAA said we didn’t have enough civilian operations for them to support 2 runways for Brewton of that magnitude,” said Lambert. He, in turn, was told to select the best runway and expect the other two to stop all operations. “The city couldn’t keep it. It equivalent 6 miles of county road in that one runway,” explained Lambert. According to Lambert, it was at this time the U.S. Navy offered to keep both runways. He shared, “The navy caught wind of this and they stepped in. They said, ‘Just wait a minute.’ They proposed to the city. They said, ‘Here’s what we will do. We want to keep both runways.’” Saving two operational runways, the U.S. Navy conducted business with the city for the past 25 years. “This lease ran out the last day of June,” said Lambert.
“They are working on what they hope will be a new agreement. They want to sign another 25 years. Basically it is the same verbiage, the same deal, they practice 5 days a week-30 minutes after daylight, 30 minutes after sunset,” he added.
Lambert attributed the success of the airport during the pandemic to the Navy. Lambert said, “I think it’s the thing to do. This has helped us too during the pandemic. We rent hangers and we get money from the Navy. We make enough money to survive. In this pandemic, a lot of airports have suffered terribly, but we have been clicking, the Navy is still there.”
Following his presentation, the ordinance was introduced to the council and then voted upon. However, the ordinance did not receive a unanimous vote and therefore will be carried to the next meeting for approval. In other new business, the council approved the FAA Airport Grant Agreement. Lambert explained, “This is really just our yearly grant. The city receives $150,000 dollars a year entitlement funds. This year, we’ve got some repairs to the drainage system. That piece of property is marginal swap land. It is very critical we maintain the drainage system.”
Finally, the USGS Gauging Stations Agreement for all three creeks- Conecuh, Burnt Corn, and Murder- was approved by the council.
The next meeting is scheduled for July 28 at 4:30 p.m.

Over the past two days, MainStreet Family Care in Brewton has seen an influx of patients. “Right now our clinics... read more