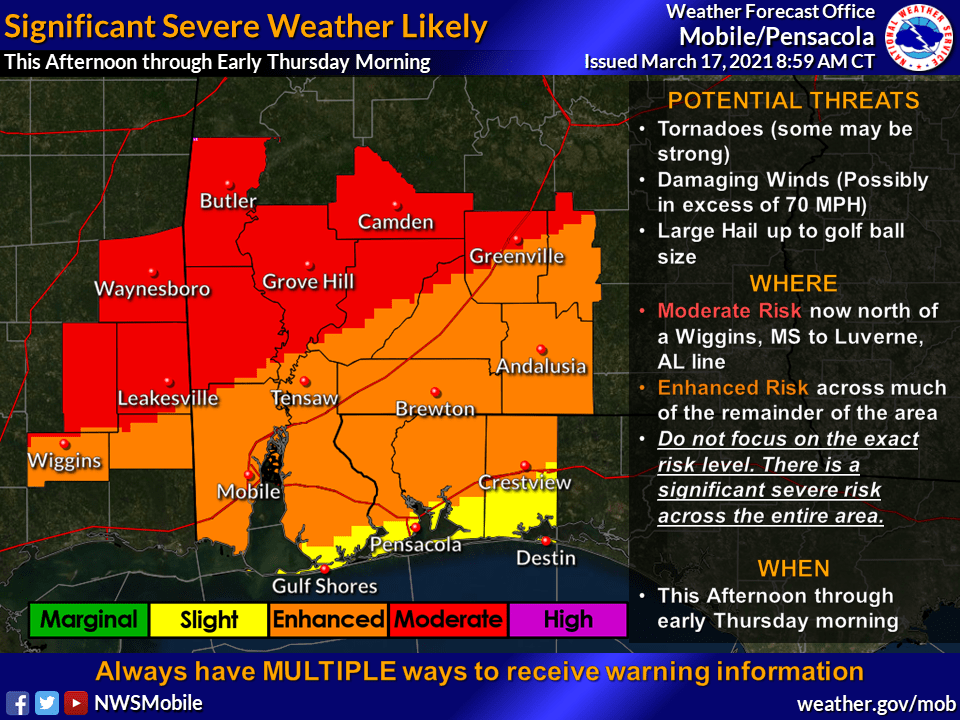 The National Weather Service in Mobile is continuing to update information as an expected severe weather event approaches our area here in south Alabama.

The following information was released at about 10:30 a.m. on Wednesday and highlights some concerns for the next 24 hours. The graphic attached to this post will give additional information as well.

“Our confidence remains relatively high for a significant severe weather event this afternoon and tonight before the threat ends from west to east with a cold frontal passage,” NWS information stated. “All three modes of severe weather are possible, tornadoes (some strong, EF2 or higher), large hail and damaging wind gusts to 70 mph +.  We have seen nothing in the data to sway original thoughts and the webinar slides that were sent yesterday, and reflect our collective current thinking on the What, When and Where aspects of this upcoming event. Now is the time to bring any final preparations to a close!”

We also wanted to provide an update on the ongoing flooding situation that has developed over interior southwest Alabama.

o This Afternoon Through Mid Evening: WHAT?: Isolated, discrete to semi-discrete supercell thunderstorm development remains possible this  afternoon across the entirety of our CWA. WHEN and WHERE?: Best timing for convection to develop still appears to be after 1 PM CDT. These thunderstorms will move from southwest to northeast across the CWA through about 9 PM CDT. The environment is favorable for the production of strong tornadoes, damaging winds to 70+mph, and large hail upwards of golf ball size.  The biggest question that currently exists is with respect to coverage during the afternoon and evening.