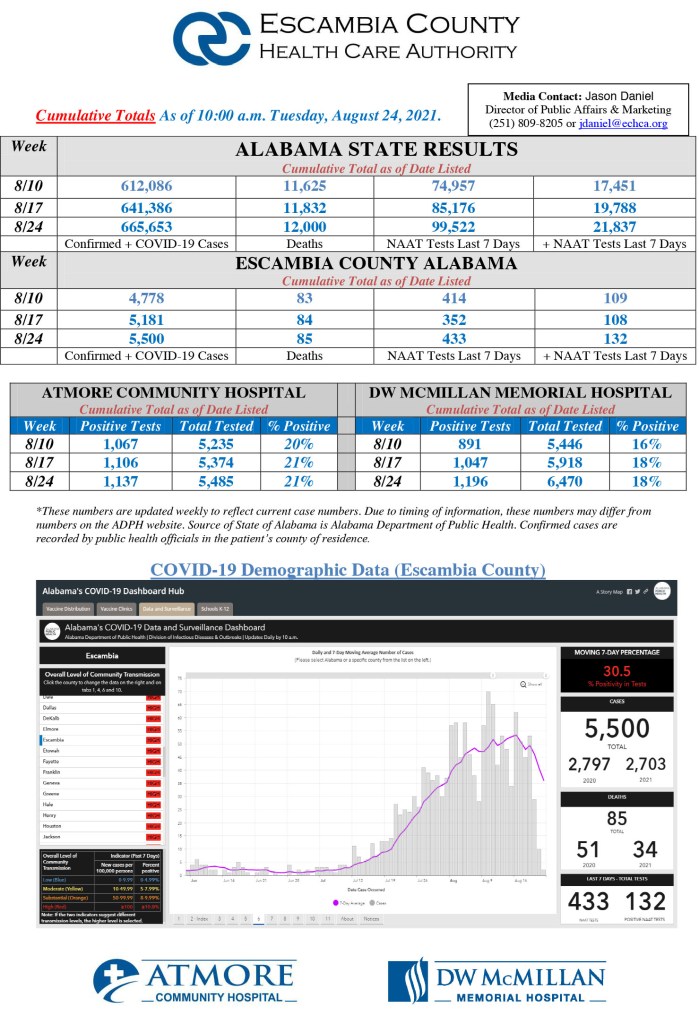 As of Tuesday, the weekly update shows 132 positive cases resulted from 433 tests administered.

Local pharmacist Danny Cottrell said the decline in the number of cases is good news, but people still need to be vigilant against the virus.

“It seems that the number of cases is beginning to drop off,” Cottrell said. “Be people don’t need to relax too much just yet. The urgency right now is on giving shots to those who are unvaccinated.”

Cottrell said his pharmacy in East Brewton, Cottrell’s Hometown Pharmacy, has seen an increase in the number of people seeking the vaccine.

“We went from giving about 20 shots a week to giving about 150 shots in a week,” Cottrell said. “We have done as many as 230 in a week for first-time vaccines.”

Cottrell said some of the increase in the number of vaccines given across the county may be attributed to the recent FDA (Federal Drug Administration) approval for the Pfizer vaccine.

“For those who had a reason to not get vaccinated, that part of the argument is gone,” Cottrell said. “Moderna approval should be right behind the Pfizer approval. We may begin to see more mandatory vaccine orders now that it has been approved. I think we may see more private businesses require the vaccine for their employees.”

Testing in the county has shown that a spike in cases of COVID-19 became evident in mid-July. The latest numbers show that the number of new cases began to show a decline around Aug. 18.

Current numbers released by the Escambia County Healthcare Authority show the number of positive cases from testing at D.W. McMillan Memorial Hospital as 149 over the past seven days. That number represents 18 percent of those tested for the virus.

In Atmore, 31 new cases resulted from tests at Atmore Community Hospital. That shows 21 percent of those tested resulting as positive cases.

The county as a whole is seeing a slight decline in the number of positive cases.

According to ECHCA data, 8,123 county residents are fully-vaccinated agains the virus with nearly 12,000 having received at least one dose of the vaccine.

Data also shows that the historical track of the virus has infected 5,500 people in the county and a total of 85 deaths attributed to the illness.

Of the 433 tests administered in the past seven days, 132 residents have tested positive for the virus.