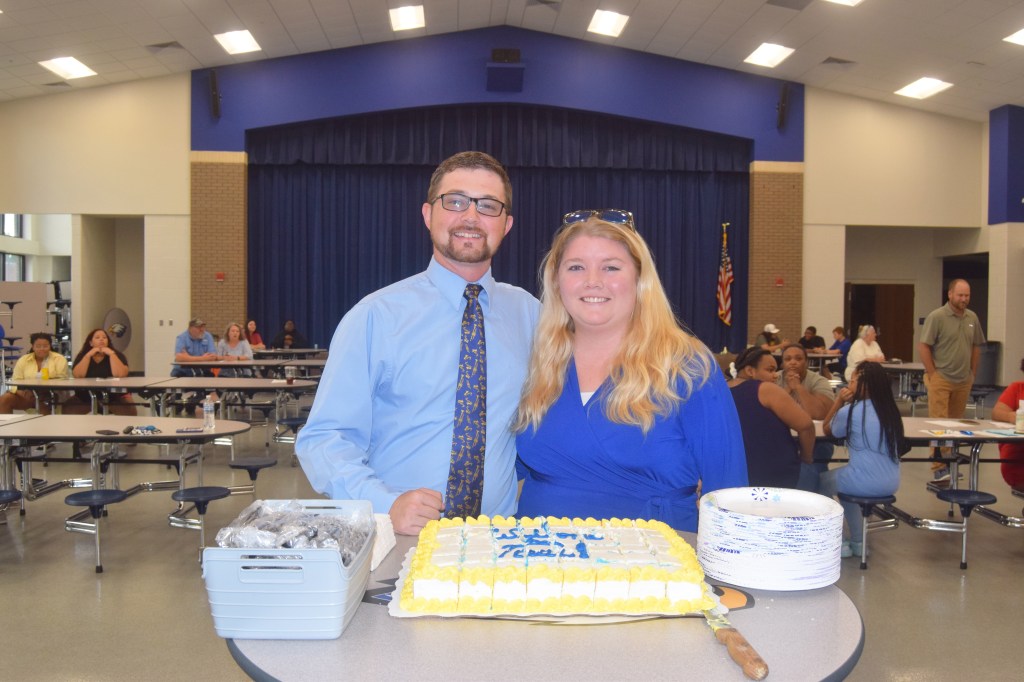 There’s a new song playing at W.S. Neal High School as Blake Van Winkle steps into the position of band director.
Van Winkle, a graduate of Troy University, has hit the ground running and has already been working with sections of the nearly-100 member band.
“We’ve already been working this summer,” VanWinkle said. “We’ve been running camps for the past two weeks with percussion, leadership, auxiliary and will be working with brass and woodwinds this week.”
The camping will go on again next week as the entire band gets geared up for the new show Van Winkle has in mind.
“It’s been great so far,” Van Winkle said. “The students and the community has been open and receptive to the new show ideas.”
Brittney Van Winkle is a graduate of Flomaton High School and will be working as a teacher’s aid at the school this coming year.
“We’re glad to be here,” Brittney said. “Coming home to the area is a blessing.”
Van Winkle said he was nervous about stepping into the position left behind when Kimberly Waller retired at the end of the previous school year.
“I figured they would be looking for someone with years and years of experience,” Van Winkle said. “I wanted the opportunity, so I applied. Things have worked out and I’m here and excited about what is ahead for the band.”
Van Winkle said he plans to have a large amount of input from the students in the band and work toward goals for everyone.
“I want to empower the kids in the band and let them have a voice in their band,” Van Winkle said. “We have already been making some changes and will make more, but we are keeping what’s most important with the students with traditions for the band.”
Van Winkle said the upcoming season of shows for the band will be around an idea.
“It’s all fun and games until…, is our them these season,” Van Winkle said. “We will be using a lot of Elton John tunes. Tommy, Pinball Wizard, Your Song, Saturday Night is Alright for Fighting and Funeral for a Friend.”
Van Winkle also said a percussion solo will be featured during the show with work put in by percussion instructor JaCorey Benjamin. Benjamin is a graduate of W.S. Neal High School and is currently a student at Troy University.
“We’re excited and hopeful that this will be a good year for W.S. Neal Band,” Van Winkle said.
Van Winkle is a native of Eva, in North Alabama and has been band director at Samson High School and Kinston High School prior to coming to East Brewton at W.S. Neal High School.

Kiwanis serve up a “blue-tiful” breakfast