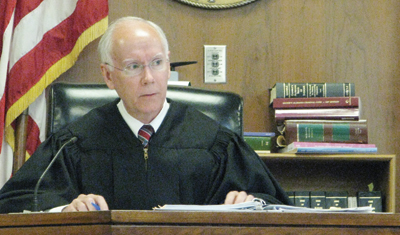 A group of high school seniors had a unique privilege Thursday and Friday, serving as jurors in two cases during Escambia County’s annual Law Day.

Circuit Judge Bert Rice told the seniors in court that they were being given a distinct honor to be able to become a part of the legal system.

“You may not realize that you are being given an opportunity that not everyone gets,” he said. “The defendant and his attorney have given their permission to abide by the decision that you make. You should listen and pay close attention to the witnesses to determine the outcome. Most student courts have mock trials, but this is a unique opportunity.”

Seniors from all four high schools in Escambia County took part in Law Day activities Thursday and Friday, with students chosen each day to serve on a jury in an actual case.

“Law Day in Escambia County has been recognized as rather unique,” Stuart said. “The jury is made up of seniors from the area high schools and it is an excellent way to teach the students the way a court works.”

Alyce Spruell, president of the Alabama Bar Association, told the students from Flomaton and Atmore that Law Day teaches them the way a court works and also teaches leadership and responsibility.

Defendants in the cases agree to have their trials heard by the high school juries. In the case seniors heard Thursday, defendant Nadar Al-Aawah was tried on charges of driving under the influence and obstructing traffic.

Witness Joey Williams, a member of the Poarch Tribal Police, testified that he saw the defendant pull to the side of the road and it seemed as if there was an altercation between the defendant and a female who was a passenger. When the officer approached the defendant’s vehicle, he smelled alcohol, so he administered some on-site tests to determine whether the driver was intoxicated, Williams testified. The defendant was arrested.

Williams said he also charged the defendant with obstruction of traffic (or improper parking) because the vehicle was not pulled completely off the pavement.

After the case was presented, the senior student jury adjourned to debate the case. A short while later, they returned to render a verdict of guilty for the driving under the influence and not guilty of the obstructing traffic charge.

Joseph Husband, a student from Escambia County High School, did not serve on the jury but said he believed from his observation in the courtroom that the jury made the right decision. “I think he is guilty,” Husband said. “The defendant’s lawyer hasn’t proven his innocence.”

Colton Respress, another student from Escambia County High School, said he also thought the defendant was guilty, but not for the same reason.

“The officer smelled alcohol and the defendant admitted to having had a drink,” he said. “The officer had to go by what he saw.”

On Friday, seniors from T.R. Miller and W.S. Neal high schools got a chance to see how the court works.