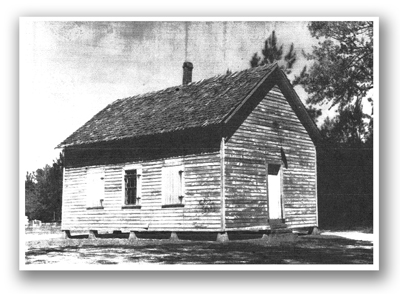 One hundred years ago, three brothers decided to start a new chruch — and the church that became known as Rock Holiness Church will celebrate its centennial on May 22.

Rock Holiness is located on Upper Creek Road in the Flomaton area. While the church no longer has a congregation, many families still visit the cemetery near the church.

Seaborn, Will and Lee Rush Golden were sons of John A. Golden (29 July 1841-19 Nov. 1897) and Rebecca Webster were instrumental in founding Rock Holiness Church.

Lee Rush Golden was the father of a set of triplets born on July 18, 1913. Matthew died Jan. 9, 1914, and his brother, Mark, died May 22, 1914. Luke survived and grew up to marry Ruthie Mae Morgan and they were the parents of William Lee Golden of The Oak Ridge Boys, Ronny Golden and Lanette Golden Lowery.

These pioneer family members were just some of the people who decided to build the church, a place where they could worship God as they wished.

Scotty Schinke, who is helping to organize the celebration, said the ground for the church was donated by Andrew Jackson Knowles.

“Mr. Knowles owned 95 acres of land in the area and he gave the congregation two acres on which to build the church and cemetery,” Schinke said.

“The church and congregation was very small, and everyone finally went their own ways, leaving the church empty for several years.”

The church membership was never big to begin with, and over the course of 40 years, people moved away from the area and the church was left abandoned for many years.

Schinke said Steve Aydelott has been working on putting a new roof on the old building and working on refurbishing the place.

“It’s not often we can go back 100 years in the life of the church, and we felt like it deserved and needed the recognition of a centennial celebration,” Schinke said.

The church is located at 440 Upper Creek Road in Flomaton, and those who have family buried at the cemetery have gotten together and formed the Rock Holiness Church and Cemetery Association.

On Saturday, May 22, those who have interest in attending the old church or who have family buried in the cemetery are asked to come to the celebration, which will begin at 10 a.m.

A full day of events has been planned, Schinke said. The Friendship Volunteer Fire Department will be cooking and serving plates and drinks. Everyone should bring their lawn chairs and, if possible, come dressed as early members of the church would have been dressed. Singing is planned and entertainment will be provided by The Rowell Band of Milton, Fla.

Organizers said “perhaps” some of the Oak Ridge Boys. Judy Strait will play for a gospel singing to be held in the afternoon.