Lady Tigers out in first round of regionals 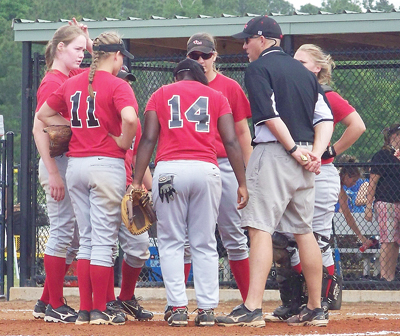 It wasn’t the way they wanted their season to end. The T.R. Miller Lady Tigers were out on the first day of the 3A regional tournament, losing to Slocumb 13-1 Friday morning and to Headland 3-2 Friday evening.

Against Slocumb, the Lady Tigers were held to only one hit and three baserunners in the five inning game while committing four errors-three in the first inning on the first two batters.

“We made two errors the first two plays of the game, and that kind of set the tone for the rest of the day and from that point one we didn’t do not much very good,” head coach Greg White said after the first game. “Three people got on base and we just didnt do much. When you don’t do much, you can’t steal, you can’t pitch, you can’t bunt. They made more plays than we did. We played in a hole all day long and just couldn’t get out of it. It was just one of those days and we had it today.”

T.R. Miller would score one run in the bottom of the first to cut the deficit to three after the first inning.

That would be the only run of the game for T.R. Miller while Slocomb scored two in the second, three in the third, and four in the fifth to get the mercy rule win.

Sarah Lee had the lone hit in the game in the second inning going 1-for-2. Natalie Neal had the lone RBI, scoring Leah Brundidge on a sacrifice fly. Brundidge led the game off with an error.

Neal and Kristen Booker scored runs for T.R. Miller in the second game against Headland.