Stallworth: ‘I claim everyone as my children’ 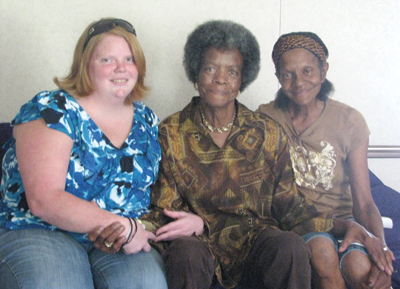 Thousands of residents in the Brewton area and some from across the country have a “mother” in the form of Pearl Stallworth.

Chances are if you have ever met Miss Pearl, you are referred to as one of her “children.”

“I have thousands of people I call my children,” Stallworth said. “I have met so many people over the years that I now call my children. I can honestly say that I love every one of them.”

Brittany Milstead met Stallworth in 2006 while she was a student at the Escambia Career Technical School.

“W stayed friends ever since,” Milstead said. “She calls me her child and makes me feel that way.”

Stallworth says she has claimed so many people as her children over the years she doesn’t have to worry if anyone will check on her.

“I claim everyone as my children,” Stallworth said. “I love it that way because so many of my children come by to check on me and call to see if I’m OK. I don’t have to worry about not being checked on or taken care of.”

Stallworth was diagnosed with cancer last year and has undergone surgery and treatment for the disease. That period in her life has given her a chance to “adopt” even more children into her family.

Being a mother of sorts to so many children, Stallworth said the opportunity has given her a chance to see how richly love can be returned.

“I always said ‘love is as love does,’” Stallworth said. “It really is true. When you show love to someone you get love in return. That’s how I’ve come to have all these children. When I meet someone I show them love and that’s what I get in return. It has truly been a blessing in my life.”

As with any child, sometimes being a mother can be difficult, Stallworth said.

Stallworth had six children of her own to raise and care for as a young mother.

“I had six children that I gave birth to,” Stallworth said. “I have five children still with me, but I have so many other children who I check on and care about.”

Stallworth’s children include Deborah Stallworth, Elzina Frazier and James Stallworth who all live in Brewton, Margaretta Cooper in North Carolina and Amanda Kennedy in Georgia. Her stepchildren are Joann Stallworth of Brewton and Fred Stallworth of Milton, Fla.

Her son Wayne Stallworth was killed in an automobile accident more than two decades ago. A park Stallworth maintains near her home on Pea Ridge Road is dedicated to her son Wayne.

Stallworth said her children are across the country in several states including California, North Carolina and Georgia.

“Some of my children have moved on from Brewton and are in different places now,” Stallworth said. “I have a daughter that lives in Georgia and the people I’ve met there are now my children. I have children all over the country and I love to hear from them.”

Hearing from any of her many children brings joy to her life, Stallworth said. Mother’s Day, she says, should be a special day.

“I will probably have people in and out of here all day,” Stallworth said. “I don’t plan on doing any cooking, but I hope my children stop by.”