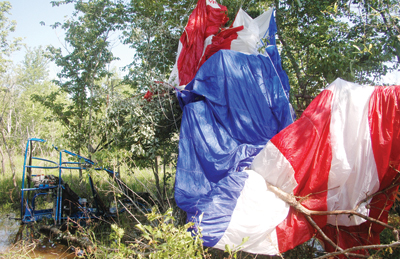 Two sheriff’s officers were injured and the department’s new powered parachute was damaged in a crash Wednesday morning, but Sheriff Grover Smith said all are on the mend.

Chief Deputy Mike Lambert and a drug task force officer were flying in the Powrachute Wednesday morning when it clipped a tree and crashed on private property near Flomaton. The pair were taken to D.W. McMillan Memorial Hospital and treated for minor injuries, but Smith said they were released later that day.

“Mike’s a very competent pilot,” Smith said. “I think what we’re going to find is he just didn’t take the wind into account.”

Smith said he called the Federal Aviation Administration to report the accident, but FAA officials declined to investigate because the powered parachute — which looks something like a dune buggy with a parachute attached — is a public use aircraft.

The Powrachute was due for maintenance anyway, so Smith said the damage caused would likely be a few hundred dollars.

“We were sending it back to the factory to put lights on it anyway,” he said.

Smith said he believes the hot, humid weather was a factor in the accident, because higher temperatures prevent any aircraft from gaining elevation as quickly as they do in colder weather.

Smith and Lambert, who are both trained in using the Powrachute, have mainly used the aircraft in colder weather.

The Powrachute is on loan to the sheriff’s department for a year from the federal government, but Smith has said the department will likely be able to keep it for free once the evaluation period is up. The aircraft runs on gasoline and is fuel efficient. The sheriff’s department intends to use it to help look for missing persons or fugitives — or for drugs, which is what Lambert was seeking Wednesday morning.

“This is a prime time for marijuana fields,” Smith said. “I think they may have found a couple and were going back to look for them.”