Fishing boat captain on oil spill: ‘This is devastating’ 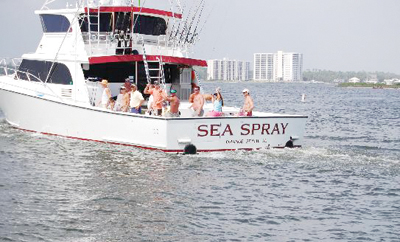 Escambia County native Bill Staff Jr. has seen an impact on his fishing business since the oil spill in the gulf.

The black gold floating on the surface of the Gulf of Mexico threatening beaches of three coastal states has left charter for hire companies digging for pocket change.

As oil continues to seep from below the ocean’s surface following the destruction of the Deepwater Horizon drilling platform off the coast of Louisiana late last month, those same charter companies have been docked, anxiously awaiting word that the leak has been contained.

Escambia County native and owner of Sea Spray Charters, Capt. Bill Staff Jr., has already seen the effects of the oil spill over the last two weeks and fears it will only get worse as the oil leak continues.

“It’s already hard to make a living, and if we take much more, it’s going to be almost impossible,” Staff said Tuesday, a day originally scheduled for a charter trip.

Staff said he believes national media hype has caused fear in many gulf visitors who have been canceling trips based on false information.

So far, six charter trips with Sea Spray Charters have been cancelled. With each trip averaging $3,500 to $4,000 in revenue, it has already put a dent in the company’s budget to the tune of nearly $24,000.

“It’s kind of like a stake in the heart,” Staff said. “It’s pretty tough.”

The money earned during the peek season is what Staff and his family live on throughout the year for the 65-foot Sea Spay is his only source of income. The revenue it generates not only pays Staff’s salary, but also is used for operational expenses such as for fuel, boat payment, bait, dock fees and insurance year round.

Staff said that in addition to the oil spill and a lackluster economy, fishing regulations have limited snapper season, prime fishing in the Gulf, to just over three months.

“What (government) doesn’t understand is that snapper season is already condensed down so much that when you take a week out of it, it’s pretty severe,” he said. “I’m sure it’s going to get worse. The big thing is they need to get the spill stopped.”

Fortunately for Staff, some of his fishing charters booked so far this month have continued as scheduled. In fact, he fished Thursday, Saturday and Sunday and was not hindered by the oil. Customers left happy after catching numerous fish, Staff said.

“I’ve probably been more fortunate than most having the least cancellations because some have had more,” Staff said. “It’s the same or worse for everybody.”

With the current and winds pushing the oil spill away from Alabama, Staff said he believes the closed areas should be re-evaluated.

“I’ve seen no sight of oil,” Staff said. “The oil is actually moving further away from us because of the east wind and east current. We are hoping that they would amend the closed area, make it smaller. More than anything, the hype has caused the people to be afraid of it. There are closed areas that I do go fishing in. Between the two, it’s really costing us business. I think that the closure area is too large right.”

Staff added that the current affects floating debris and oil “way more” than the wind does, and right now the current is on the fishermen’s side.

“If they don’t stop the leak, as the summer comes along, we get a lot of West wind and current, normally in June, which will bring it all back,” Staff said. “That’s what got people worried. If they could stop it, I think it would go away quick.”

Officials with numerous governmental agencies have been working with BP to try to contain the oil spill. Cleanup efforts have included burning some of the oil, using barriers to try to contain it and a 100-ton steel-and-concrete box to cover a deepwater oil well, which was aborted after deep-sea ice crystals, encased it.

As for the future of drilling offshore, Staff is still in favor of it, but believes regulations should be in place to prevent disasters such as the Deep Horizon explosion, which killed 11 people.

“It’s been such a long, rough winter, we were looking forward to a decent year. This is pretty devastating. I make my living around those oil rigs and I’m not against offshore drilling, but I think they need some more precautionary measures. Even though we were still way off with our bookings, it was looking better than last year.”