No flood funds available yet 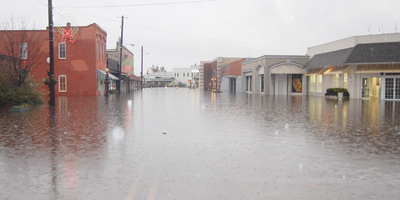 City and county officials are still waiting for federal funds to help make repairs and mitigation projects since the December 2009 flood.

With funding to help offset the costs of flood repairs in Escambia County tied to a bill on funding for the war in Afghanistan, politics may be playing a role in how soon local officials get the money.
County Commissioner Larry White said he wasn’t optimistic that funding would come any earlier than June.
“I’ve talked with Senator (Jeff) Sessions and Congressman (Jo) Bonner and have found out that the bill that would provide supplimental funding for FEMA was supposed to come up in April,” White said. “That didn’t happen. The bill (to release FEMA funds) is attached to a funding bill for the Afghanistan war. They’re just playing politics now. I don’t expect to see anything happen until after the primary (election) in June. I’m not optimistic that we’ll see anything before then.”
In the meantime, Brewton City and Escambia County officials are at a standstill when it comes to making needed repairs in damages caused by the December 2009 flooding throughout the county.
White said the funding of the war being tied to the FEMA funding bill puts an earlier vote of approval in doubt.
“I know they’ve got to fund that war before the end of the summer,” White said. “Since that’s the case, the funding should be available in August.”
Brewton Mayor Ted Jennings said some funding may be coming soon, but for the majority of repairs funding has not been made available.
“We are still waiting for approval on the funding we’re expecting from FEMA,” Jennngs said. “We have sent in everything we needed to send in and we’re at the point where we’re waiting to get reimbursed on some things.”
Jennings said emergency work was done on the city’s lagoon following the flood, but those reimbursement funds have not been received.
“We expect to get the funding and we have every indication we will get the funding for the work we did at the lagoon,” Jennings said. “We had to do some emergency work there and mitigated the work raising the sides higher there. We’re getting a little (funding) along for some projects but we are just waiting on final approval before more work can be done.”
Escambia County officials are facing the same situation — wait.
County Administrator Tony Sanks said about $8 million in funding is needed to make the repairs but no action from Congress has been taken to disburse those funds.
“Our total project estimate to repair the damages is over $8 million,” Sanks said. “We have no idea when those funds will become available.”
FEMA officials have approved the needed funds, but Congress must first allocate the funding before projects can move forward, Sanks said.
“We have about 40 projects called mitigation projects,” he said.
“That means that those projects will repair damages to bring the areas into a condition that is better than they were before the damages. We can’t move on those projects until funding is in place and the projects are approved.”
Those projects remain in limbo until they are approved and funds are made available, Sanks said.
“We certainly don’t have funding in place to pay for the projects on the mitigation list,” Sanks said. “Even if we did, we couldn’t do the projects until funds come to us through FEMA. If we did any work on those projects that would become ineligible for funding if they are done before being approved.”
Sanks said some funds have been distributed to the county for emergency costs involved in work immediately following the flood.
“We have received what they call emergency funding,” Sanks said. “That funding pays for work directly related to emergency response following the flood. That would include (Escambia County Sheriff’s) deputy overtime and emergency measures taken by the road department including barricades and other safety measures.”
Sanks said the county has received $9,976 allocated for the Escambia County Sheriff’s Department and $120,819 allocated to the Escambia County Road Department.
With other disasters recently — including massive flooding in Nashville — the need for FEMA funds could be more on the minds of Congressional leaders.
“There have been so many disasters around the country in the past few weeks that it brings that FEMA funding to the attention of Congress,” Sanks said. “Hopefully, with that being in the forefront right now, they will see a need to make an immediate decision on allocating those funds to FEMA to help clean up these disasters.”
For residents in areas where damages bridges and roads remain an issue for travel, Sanks said patience will be necessary.
“We aren’t the only people waiting on funding to repair damages,”
Sanks said. “We could see Congress make a move on allocating the funding we need maybe by June, but right now, we’re just going to have to be patient.”