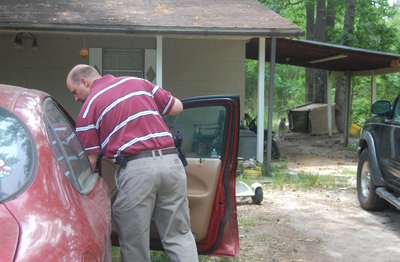 Probation officer Tim Cook looks in a car outside a house on Ridge Road Thursday where officers said they found a meth lab and prescription drugs.

Drug task force agents arrested a Brewton woman Thursday and expect to issue warrants for the arrest of her husband after the alleged discovery of drug-related materials — including a meth lab — at their Ridge Road home.
Sonya Andrews, 27, of 6838 Ridge Road, was arrested and charged with three counts of unlawful possession of a controlled substance, unlawful possession of drug paraphernalia and unlawful manufacture of a controlled substance.
A warrant for the arrest of Brad Andrews is expected to be executed on similar charges. He was not at the residence at the time of the search.
The arrest of Sonya Andrews came after officers with the 21st Judicial Drug Task Force and the Escambia County Sheriff’s Department responded to tips of drug activity at the house.
Task Force Commander Brandon Burkett said the discovery of the drug-related materials was found after obtaining permission by Sonya Andrews to search the residence.
“We did a ‘knock and talk’ with Sonya Andrews and obtained consent to do a search of the residence,” he said. “In the process of that search, we found materials used in a meth lab, several prescription drugs of Zanex, Lortab and Soma, and drug paraphernalia.”
Agents said the Andrews were on probation from Covington County on charges of unlawful possession of a controlled substance and unlawful possession with intent to distribute.
“They both will be facing violation of probation in Covington County due to the new charges,” Burkett said.
Sonya Andrews was taken into custody at the scene and was booked into the Escambia County Detention Center. She remained in jail Friday on a $100,000 bond.
At least two pit bulls found at the scene were transported to the Escambia County Humane Society’s shelter.
Anyone with information regarding the whereabouts of Brad Andrews is asked to contact the Escambia County Sheriff’s Department or any other law enforcement agency.