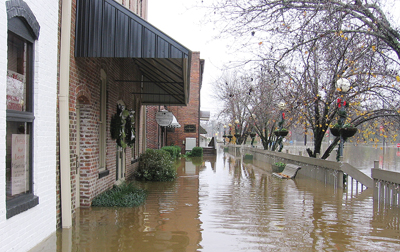 Nearly five months to the date after floodwaters damaged and covered Brewton and East Brewton, local business owners that were affected by the flood in December say business is going well for them.
Floodwaters from Murder and Burnt Corn creeks rose out of their banks, overtaking anything and everything in its path in the early morning hours of Dec. 15, 2009.
One of the businesses in Brewton was in direct line of the water and probably saw the most water was the Bank of Brewton mini bank.
“We are back in the swing of things,” bank worker Verdie Findley said. “It’s not completely as it was before, but it is workable and we are doing business now. We were out of business (at the mini-bank) about six weeks. I would say a good three feet of water came in our building, probably up to the doorknob on our doors. We were sure happy to get back to our customers and I know they were glad to see us.”
Jacki Lynn, owner of Jacki and Company on the boardwalk in downtown Brewton, also felt the effects of the flood in December, but after having to move out of her shop for a while, continued her business and is seeing improvements now.
“I had eight inches of water in my shop,” Lynn said. “Now, with having a masseuse and a person who does facials, we have seen a significant increase in business here.”
Lynn said she was closed for two days from her shop, but was out of her building for 10 weeks. During that time she worked in a makeshift shop in a temporary location in the Milligan’s building near her shop.
“I was out of my shop due to water damage and having to redo the interior of my shop from the ceiling to the floor,” Lynn said. “I was able to move back into my shop on Feb. 27.”
Anne Ramirez at The Treasure Chest in Brewton said business has been flat overall due to the economy.
“We were closed for two days during the flood on Dec. 15 and 16, also due to cleanup efforts,” Ramirez said. “We opened back up for business on Dec. 17. It took about two months to have the store back in order as we replaced carpet and hardwood floors, but we did not loose any merchandise.”
Candy Smith of Shades of Gray in Brewton said the flood couldn’t possibly have happened at a more inopportune time.
“Most retailers look to the Christmas season as a time to up the profit margins, so that’s why we could not stay closed for long,” Smith said. “We were only absent from the store one day.  Then as soon as possible, and when the floodwaters receded enough, we were downtown cleaning up. Even as we were cleaning, mopping, and tearing up carpet, the next day, customers came in (mostly to see the damage, etc).  We had a lot of media attention, as I think we did five interviews in one day for TV stations. But we were back in business, but for the lack of carpeting. We decided to open ASAP and didn’t want anymore down time, so we waited until after the holidays to put in our new carpeting. We still have people come in saying, ‘Oh, you got new carpeting!’ The store took in about six to eight inches of water, just enough to make it gross.”
In addition to the flood problems, stores are also coping with a tough economy, Smith said.
“I can’t really say if the flood or the economy had the greater impact on our business during the holidays,” Smith said. “But it was off from the last couple of seasons.  Being a business in the downtown flood zone is not a matter of if a flood will affect you, but when it will affect you.”