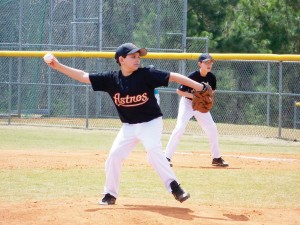 Adam Robinson | The Brewton Standard Brewton Little League Astros pitcher Daniel Blair, front, throws a pitch in a game this season for his team as first baseman Hayden Atkinson awaits a ball to come his way.

With two teams fighting it out for the league lead in the Brewton Little League 11-12 Division, it has been a resurgent Rangers team who has made all the noise of late.

The red-hot Rangers are riding a three-game win streak within the league and a four-game streak overall, including Monday’s impressive 5-4 win over the league-leading Brewers.

In the 9-10 Division, there is a tight race going on there as well. While the Astros needed a game-winning hit in their final at-bat to edge the Marlins 11-10, it meant they were able to stay ahead of the Braves (whom they had beaten 13-2 Friday) for the top spot in the standings.

A mix of timely hitting, masterful pitching and incredible defense helped lead the Rangers to another big victory.

It took Salter less than 30 pitches to get through the first three innings as his team spotted him a 3-0 lead with which to work.

While a monster two-run bomb by Brewer Jared Cooper cut the lead to 3-2 in the fourth, the Rangers tacked on two runs in the fifth to make it 5-2.

Ethan Tyree drew the Brewers (9-2) to within 5-4 with a two-run double in the fifth, but Salter settled and got two outs. With the tying run on second base in the bottom of the sixth, Williamson came in to get the final out with a strikeout to secure the win.

The Rangers were led at the plate by Tim McDonald (2B, RBI) and Christian Mancil (2 RBIs), both of whom had a pair of hits. Landon Salter and Lane Clark each had a single.

The Brewers – who left nine runners on base, including the bases loaded twice – countered with seven hits.

Ethan Tyree was 2-for-3 with two RBIs, while Cooper added a pair of hits, including his home run. Tyler Hoomes added two hits, including an RBI double, while Christian Alvarez added a double and Joshua Winton a single.

After spotting the Tigers an early 1-0 lead, the Rockies (8-3) used a Hunter Brittain home run as a springboard to the eventual win. Brittain – who hit his sixth homerun of the year – finished the night with a pair of hits, including a double, and had four RBIs.

Kellyn Winn added a pair of hits, including an RBI and two runs scored. Both Christopher Gehman and Alex Daugherty added 2-for-2 performances, and Trippe Floyd added a hit and scored three times. Floyd, who started on the mound for the Rockies and got the win, combined with Daugherty and Winn for six strikeouts and yielded just two hits.

The Tigers’ hits came off the bat of Duncan Brittain – who had a triple and scored on a passed ball in the first inning – and Austin Holmes, who singled and scored.

In the bottom of the final inning, Micah Flores drew a walk, moved to second on a fielder’s choice out, and scored the game-winner via a double by Daniel Blair.

While Blair was the starting pitcher, Hayden Atkinson threw two ground-ball outs in the top of the fifth and got the win after Blair’s heroics in the bottom of the inning.

Blair struck out six in just over four innings of work.

The same combination worked at the plate as well, as both Atkinson and Blair had two hits apiece but got help from Flores’ three walks and four runs scored. As well, Nelson Martin rapped out a single and scored twice. Both Davis Wade and AJ also contributed hits.

The Marlins got two hits from Andrew Etheridge, which included a triple, while Demonte Jenkins (3B) and Cameron Pope (2B) also had extra-base hits. Matt Smith and Todd Watson had singles.

For the second time in a league game, with the game on the line the final out made its way in the capable glove of centerfielder Grant Youngblood.

After robbing the Tigers of a possible game-winning three-run home run the previous Monday, Youngblood caught a ball at the fence in centerfield that was hit by Hunter Brittain with the bases-loaded to secure the win over the Rockies.

Tim McDonald pitched the final three innings to get the win. He struck out seven, walked two (one intentionally) and yielded just one hit.

Drew Williamson started the game and struck out two and gave up two hits in one inning of work.

Offensively, Christian Mancil was 2-for-2, including the eventual game-winning, two-out, two-run single in the second inning. Tim McDonald added an RBI single.

Brittain had a two-run home run in the first inning to lead the Rockies, while Jake Najor and Christopher Guthrie each had hits as well.

The Brewers improved to 9-1 in the league by pounding out 14 hits.

Ethan Tyree, who was 4-for-4 in the game, continued his hitting streak by extending it to 10 straight at-bats with a hit.

He finished this night with a pair of doubles, two monster home runs and had six RBIs. He also scored four times.

After the Tigers took a 6-4 lead early, the Brewers countered with a five-run second inning and tacked on six more runs in the final two innings to hold the relentless Tigers at bay.

Over those two innings, Tyree hit a two-run home run in the third and a three-run shot in the fourth.

Tyler Hoomes, Jared Cooper and Dakota Stokes each had three hits apiece. Cooper had a pair of doubles and two RBIs and Stokes added a double and three RBIs. Christian Alvarez singled.

The Tigers got three hits, including a triple, inside-the-park home run and three RBIs from Will Smith and three hits from Jordan Williams.

Jonathan Lucas and Duncan Brittain each had RBI doubles while Markail Mitchell added a single.

It was a night where the “Blair Pitch Project” stole the show, as Daniel Blair fired a one-hit gem over four innings that included 10 strikeouts and only two walks to a very tough Braves offense.

Blair helped his own cause with a pair of hits, scoring two runs, while Hayden Atkinson added a hit and two runs scored. Atkinson also recorded one inning of relief pitching, strikeout out all three of the batters he faced.