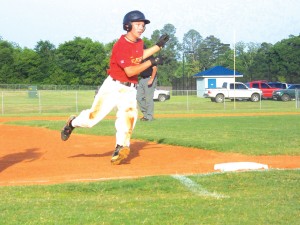 Through four Babe Ruth games for all five league teams, the standings show an undefeated team at the top, a winless team at the bottom, and three teams in the middle at 2-2 records.

The Marlins still lead the standings with a 4-0 record but needed a three-run walk off homerun Thursday in East Brewton by Dominique Jackson to stay perfect with a 6-5 win over the Astros.

In the middle, the Astros, Royals and Phillies are all tied at 2-2 while the Brewers roundup the standings at 0-4.

In Tuesday games in Brewton, the Royals defeated the Brewers 3-2 while the Phillies downed the Astros 6-4.

In Thursday games, the Marlins defeated the Astros 6-5 while the Royals shutout the Phillies 2-0.

After trailing 2-0 after two innings, the Royals scored two in the fifth and one in the sixth inning to defeat the Royals by one, 3-2.

Dylan Godwin earned the win on the mound for the Royals going seven innings and allowing two runs on three hits, walked six and struck out nine.

Christian Purvis was 2-for-4 with two RBIs in the win while Caden Lodge was 1-for-2 and Taylor Elliott was 2-for-3.

For the Brewers, Ryan Hunt took the loss on the mound going three innings and allowing one run on one hit, struck out one and walked four.

Hunt was 2-for-3 at the plate in the loss for the Brewers.

In the second game Tuesday, the Phillies improved to 2-1 while dropping the Astros to 2-1 with a 6-4 win.

Rob Stokes earned the win on the mound for the Phillies going three innings and allowing three runs on three hits, walked five and struck out four.

Jacob Fillmore was 1-for-3 at the plate with a triple and two RBIs.

For the Astros, Darby Black took the loss on the mound as he went five innings and allowed six runs on three hits, walked and struck out five.

Brian Settles was 2-for-3 and Brandon Carmichael was 1-for-2 with a double and two RBIs.

Patrick Glass was 1-for-2 with a double.

Trailing 5-3 heading into the bottom of the sixth inning, with their undefeated season on the line, the Marlins got a walk off three-run homerun from Dominique Jackson to rally and claim a 6-5 win over the Astros in East Brewton.

Cam Blackman earned the win on the mound for the Marlins as he went the final three innings and allowed one run on one hit, walked one and struck out three in relief of starter Hunter Mullins.

At the plate for the Marlins, Jackson led with a 1-for-3 day with the game winning three run homerun.

Myers had a double and Lucas and Houston Gray both had an RBI each.

For the Astros, Tyler Dehoff took the loss on the mound as he pitched the bottom of the sixth inning and allowed two hits, three runs, and walked one.

Brian Settles got the start on the mound and the no decision pitching four innings Josh Maloy relieved Settle and pitched one inning.

At the plate for the Astros, Darby Black was 2-for-3 with a double and two RBIs.

Brandon Carmichael was 1-for-2 with an inside-the-park homerun while Settle was 1-for-2.

Christian Purvis went the complete distance on the mound for the Royals allowing one hit, no runs, walked five, hit two batters and struck out 17 to help give the Royals a 2-0 win over the Phillies.

The game was scoreless until the bottom of the third inning when Damion Williams drove in Purvis to give the Royals a 1-0 lead.

The Royals added a late run in the fifth inning and hung on for the 2-0 win.

Zac Griffin had the lone hit of the night for the Phillies in the fourth inning as he went 1-for-3.

Tyler Joyner took the loss on the mound for the Phillies in relief of starter Fillmore.

Fillmore went one inning and allowed two hits and struck out 1.

Joyner went the final five innings and allowed two runs on five hits, walked three and struck out seven in the loss.

The Phillies left eight runners on base and made three errors in the loss while the Royals also left eight one base but made no errors.