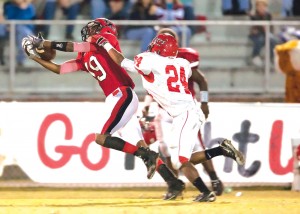 File photo | The Brewton Standard T.R. Miller Tiger Terez Lane, left, goes all out for a catch this past season against Luverne. Lane plans to walk on and play football and track at the University of South Alabama in Mobile after graduation from high school this month. At bottom, Lane jumps the hurdles for T.R. Miller this season.

A new beginning: That is how T.R. Miller Tiger senior Terez Lane describes his plans after high school.

After staring for the Tigers in three different sports, Lane plans to take his athletic abilities on to the collegiate level as he tries to walk on to the University of South Alabama Jaguar football and track teams in Mobile.

South Alabama began their football program in 2009 and will be eligible to compete for the Sun Belt Championship in 2013.

In 2012, South Alabama will play SEC team Mississippi State and in 2013, will travel to Navy and play Tennessee.

“I am looking forward to walking on the football and track team at USA,” Lane said. “I picked this school because it is a Division 1 school and a great school that’s all about your grades. They have a new football team that went undefeated last year and I know that I have a great chance at making the football team.

“It would mean everything to me if I make the team—like a new beginning. But if I don’t, I will just run track and try again next year.”

Lane, 18, although finishing up his senior year sports season, has still been working out with the Tiger football team in the weight room and running with the team for conditioning on the track during 7th period athletics.

“I am still determined to make it so I am still hitting the weight room hard and staying on the track to stay in shape n get ready for college,” Lane said.

In football during his senior season, Lane was primarily a wide receiver but also ran the ball for the team and was the punter and punt and kick off returner as well.

In track, Lane helped guide T.R. Miller to back-to-back state track championships during the 2009 and 2010 seasons.

In 2009, Lane had four individual first place finishes for state championships and two during 2010.

“I play a lot of sports at T.R. Miller, but I like football the most because I kind of think its my calling,” Lane said. “I have been playing football since I was 5-years-old. I absolutely love the game.”

“This was the biggest accomplishment,” Lane said. “Winning back-to-back would be the most important. I just felt like I had to do it for my team and myself. So I always laid everything on the line and left it in God’s hands.”

Lane said his mom played basketball and was very good at it, and his dad played the same sports as he did.

“But to honestly say, my whole family has a lot of athletic ability and is very good in sports,” Lane said. “I really don’t think I’m that great in sports. I think I just have God-gifted talent because I’m not that big and not that fast.

“But I have a big heart and determination to win and succeed.”