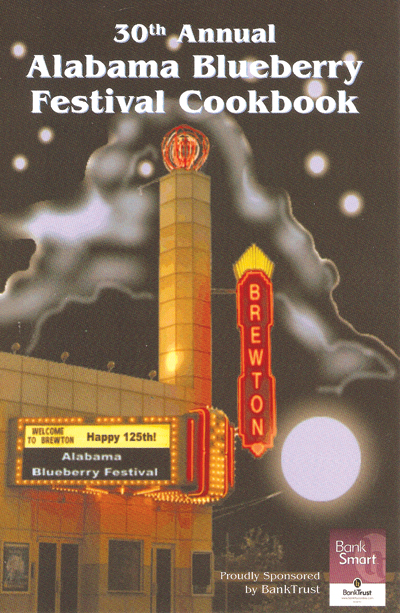 More than two decades ago, home economist Peggy Bracken had an idea to help celebrate the Alabama Blueberry Festival.

She started the blueberry cookbook, an idea which has grown to be produced annually and which includes about 200 recipes this year.

The current cookbook is now on sale and will help celebrate the 30th anniversary of the festival, which will take place on the same weekend as the city’s 125th anniversary celebration.

“Mrs. Peggy Bracken started the cookbooks at festival time,” said Michelle Hart, administrative assistant for the chamber of commerce, which puts on the Blueberry Festival each year. “Her idea grew and several cookbooks have been produced since those early ones coordinated by Mrs. Bracken.”

The cookbooks originally began as a recipe collection of dishes made primarily with blueberries as the main ingredient, Hart said.

“The early cookbooks were focused just on blueberry recipes,” Hart said. “Over the past several years we’ve incorporated other recipes in the book as well. With the addition of non-blueberry recipes the cookbook becomes more interesting to all kinds of cooks.”

“I began working on this in February,” Hart said. “It takes a while to get submission in and get things organized to get the book to the printers.”

The book contains 200 recipes in a variety of categories and includes many recipes using blueberries as an ingredient, Hart said.

“We incorporated a lot of blueberry recipes in the book this year, but we still have a lot of recipes that feature different ingredients,” she said

The book contains recipes in categories including appetizers and beverages, soups and salads, vegetables and side dishes, main dishes, breads and rolls, desserts, cookies and candy, and this and that.

Several recipes found in the book were submitted by local cooks with other recipes coming through research, Hart said.

“We do have some recipes in the book that were submitted by local cooks,” Hart said. “We also have recipes that we researched and added to the collection.”

The cover of this year’s edition was created by a local artist, Hart said.

“Steve Layton was kind enough to design the cover for the cookbook this year,” Hart said. “The ‘Blueberries over Brewton’ design has the theatre marquee with a focus on the 125th anniversary of Brewton. It’s a beautiful design and we are thankful to Steve for his work.”

The books will sell for $10 each with plenty available for purchase around town.

“The books are $10 if they are purchased at the chamber or at other locations where they are available,” Hart said. “For people who would like to have them mailed to them, we’ll be happy to do that for $2 more.”

Hart said more than 300 books were printed for the 30th annual event and are available at the chamber offices on Douglas Avenue, at the Cracked Pot in downtown Brewton and at Medical Center Pharmacy.

For more information on the 30th annual Alabama Blueberry Festival

Cookbook, contact the chamber at 867-3224 or stop by their offices located inside Brewton City Hall on Douglas Avenue.