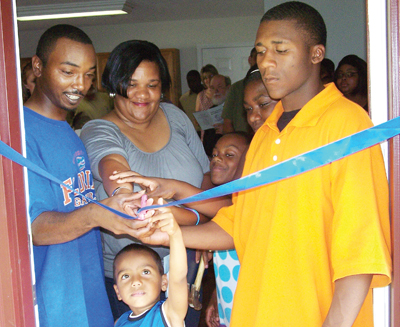 Tashan Streety and her family have barely had time to unpack in their new Habitat house — but they already have a busy weekend planned on the other side of the county, helping to build the latest Habitat house.

Streety said she is looking forward to helping another family achieve the dream of home ownership after her own family moved into a recently renovated and dedicated Habitat house of their own.

The house, which was actually the first Habitat house built in Brewton, had been vacated by its previous owners and needed some tender loving care. After several months of renovation, the family of six —Streety, husband DeMarcus and their four children — moved in.

“I’ve lived in an apartment for 18 years,” Streety said. “I always wanted something to call my own.”

For Escambia County Habitat for Humanity Director Alecia Glaize, the Streetys’ story is one of perseverance and hard work. Streety had applied for a Habitat house for five years, but her own housing situation was not as dire as some of the other families that had applied. But when the first Habitat house became available, Glaize said the board realized the Streetys would be a good fit.

“It says something about perseverance,” Glaize said. “She kept applying. We realized, this woman has been paying rent for 18 years.”

Glaize said Streety’s situation reminded Habitat board members that low income families, even when they have decent rental housing, often get “stuck in a rut” and are unable to break out of renting and into home ownership.

Habitat homeowners are not given their houses — they get a low-interest loan and also help do the physical labor to build, or in the Streetys’ case, renovate their homes.

Streety and her family, along with friends, family and co-workers, have been working on the renovations of the house just about every weekend for several months. They have also done “sweat equity” hours — the required volunteer work Habitat families must complete — at fellow Habitat homeowner April Nicholson’s house.

When the Streetys found out they would have a chance to move into their own new home, they and volunteers began by ripping out the carpet and doing a lot of cleaning. They also painted each room in the house, a task Streety said was helped by her assistant manager at Walmart, Debbie Coles.

Now that their own home is finished, Streety said she is looking forward to helping Jennifer Dorriety build her house, the first Habitat house to be built in Atmore. Streety said she understands how important the dream of home ownership is.

“It meant a lot to be able to get my own home,” she said.