After 13 days of spring practice, the W.S. Neal Eagle football team ended their final day of training with their Blue and White football game Thursday afternoon in East Brewton.

The Eagles began practice May 3 with four individual practice days for the veterans and four for newcomers with six days of full squad.

In the game Thursday, the White team (defense) defeated the Blue (offense).

Second year Eagle head coach Kevin Jordan, who was going through his first spring as head coach, said that during the week and game he saw a lot of kids competing.

“I was excited about that,” Jordan said. “Obviously when you split them up at times, you have some kids that would start both ways so there is a little bit of a drop off some times on one side of the ball. We have had to play kids both ways ever since I have been here.

“But I thought there were some kids competing and there are definitely some kids that will be able to help us that are out now.”

As for his first spring training as head coach, Jordan said he has done some practice planning in the past, especially on defense, so it was not so much of a big deal being head coach.

Jordan said the weeks of practice saw a few injuries to some players, but he feels they finished pretty good.

“We had one player, Kyle Smith, who we are still checking on,” Jordan said. “He is a starter for us and will have to have an MRI on his knee. We don’t know the extent of that injury yet, but we had some other injuries as well. We did have a broken arm on one kid earlier in the spring and he is no longer with us and we had some nicks here and there. Overall, I think we are pretty healthy.

“We did have a broken collarbone to a kid who was going to play a good bit for us. We have a couple of things we are looking at but hopefully those kids will be fine in the fall and nothing will keep them out of action then.”

As for any positives or negatives during the week, one thing that stuck out for Jordan was fumbles in the game Thursday.

On the positive side for the Eagles, Jordan said he saw a lot of kids competing and even when they were tired, they continued to play through it.

“It was a very hot day out there today, so that was a positive,” Jordan said. “All spring it was that way. Also, we have a few more numbers now than we have had in the past, but we lost a few here also.

“I hated that happened, but we still have a few more numbers and hopefully we can get through the end of school and in the summer we can have the same numbers.”

Jordan said he started spring with about 75 players and in the game Thursday, he estimated dressing around 55 or 60 players.

“Some players did not dress due to injuries today,” Jordan said. “So we are around 60. So that is good for us coming out of spring.

“We had 37 or 38 last season in the fall so it is a lot easier to have a practice and a competitive scrimmage when you can do that. In the past, we had a tough time of doing that. So that was real good.”

Jordan said one funny thing about the rosters of the game was Thursday morning, he had a lot of the Blue team veterans on offense and younger players against some younger defensive players and some veterans on the White defensive team.

“The kids thought the Blue team had the upper advantage and the White team ended up winning the game,” Jordan said. “That is why you play the game. We had the game on a scoring system where the defense could score and the offense helped them out putting the ball on the ground a lot. But it was good to see the competition.”

One of the big names lost is Jeremy Nicholson who signed a scholarship with Jacksonville State this past signing day. Another wide receiver lost was Dodson Herrington.

“With Dodson and Jeremy, you are losing two of the best leaders on the football team,” Jordan said. “Obviously, Jeremy was our No. 1 playmaker of offense last season and we lost him for four games there in the middle of the season but he was our most consistent playmaker and better player for three or four years now. Dodson was a guy who was a very good leader so losing them will hurt us and Jeremy Alexander was a key wide receiver for us at times, especially last year after moving Jeremy Nicholson to tailback.”

Jordan said there are a lot of guys this year they are excited about.

“Ashton Elliott played quarterback for us last year and has moved to wide receiver for us this year,” Jordan said. “He is a guy that has got a tremendous amount of talent, but is very new to the position. He does things that you would think a senior receiver would for for four years, but he is raw to the position. He is going to be tremendous for us I think and a great playmaker. Monterrius Culliver has never played football before or he has never played for us on varsity. He has come out and he is really fast. He catches the ball well also, so that is two guys out there who can really go and get the ball.”

Jordan also said Jeffrey McMillan is back. He played some last year and he will be a 10th grader.

“We are excited about him and a lot of our younger receivers,” Jordan said. “That will be a strength for us on into the season and the future.

“Monterrius is our only senior, so we are excited about that even though they are all new. There is a lot of talent there.”

Dylan Godwin and Cam Blackman return as quarterbacks for the Eagles, but both are still very young.

“Dylan started a few games for us last year before breaking his arm in a B-team game for us last year,” Jordan said. “He is back and he has got better and Cam is bigger and stronger and taller. They are going to be big players for us. They are still young with some varsity experience, but we are looking to those guys to be good leaders for us in the future.”

With the end of spring, Jordan said now the team will finish exams and school next week.

“We will have most of our kids next week Monday and Tuesday and then it will be a little lull,” Jordan said. “We will have a week off and then come back the following Thursday after Memorial Day and start back with our summer program. I think the layoff time is good after going three weeks, they need a break. We will come back and hit it hard starting June 3 and get ready.

“The kids are excited about the summer and trying to put the past in the past and work on building our team for the future.” 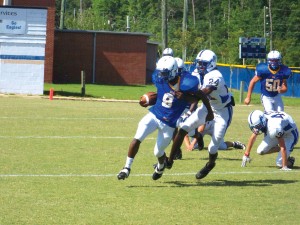