Smith, a 5-7 guard for T.R. Miller, helped lead the Lady Tigers to a 26-3 record this past season and a berth in the AHSAA class 3A Final Four.

Smith, who recently was named T.R. Miller’s MVP at the spring sports banquet Monday, finished with 593 total points in the 2009-2010 season for a 20.4 average and had 55 assists, averaged eight rebounds a game while being named to the girls class 3A all state team.

“It feels good to be able to sign a college scholarship,” Smith said Friday. “I wanted to go to Alabama Southern because it is close to home and I did not want to go far away yet.”

Alabama Southern went 19-10 overall this past season and 13-1 in conference play under head coach Rosalind Jennings.

“Nakiya is just a really good shooter,” Jennings said of Smith. “She can shoot the ball real well and just plays hard. I love that kid. She just goes out and plays hard all the time. She is tenacious and she just plays hard and you like that about a kid. She can fill it up. I am excited about her coming to us.”

“Well, I am going to miss her,” Jackson said. “We had some good years with Nakiya. She is a real good player and a real good leader. I think she is going to do well. It comes to this some times. After that senior year, they have to go on. I am just happy that she was able to get a scholarship. She is still pretty close around so maybe we will be able to see her some.” 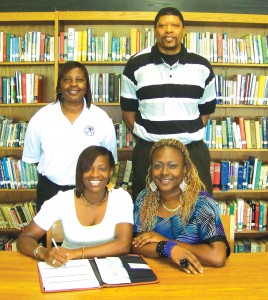