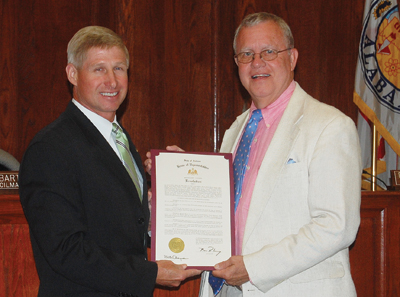 State Rep. Alan Baker presented Mayor Ted Jennings and the city of Brewton with a joint resolution passed by both houses in the Legislature and signed by Gov. Bob Riley.

The resolution congratulates the city of Brewton on its 125th anniversary, which will be celebrated June 17-19, the weekend of the Alabama Blueberry Festival, which is in its 30th year. The resolution offers the city “heartiest congratulations” on the celebration.

In other business Tuesday:

Solicitation roadblocks will no longer be allowed in the Brewton city limits, council members decided.

The issue was raised several weeks ago when a faith-based substance abuse center in Crestview, Fla., requested permission to hold a fund-raising roadblock. Other groups have held them in the past in Brewton.

Jennings asked a council committee to study the issue.

“The committee looked at several options,” Councilman Frank Cotten said before recommending that the city not allow any roadblocks in the city limits.

The council later clarified that police roadblocks will be allowed in city limits.

• The council welcomed Cary Barton back to his first council meeting in several months. Barton was injured in a four-wheeler accident in July and has not attended a meeting since.

“I’m very glad to be back,” Barton said.