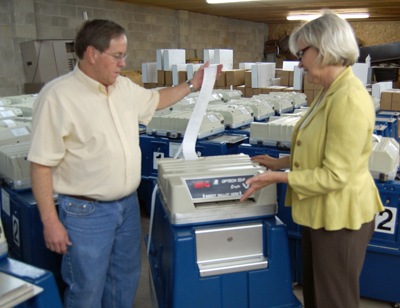 The county maintains 33 voting machines that will be used at 29 polling locations on Tuesday.

This year the county will also have signs directing voters to polling places. The VOTE HERE signs were purchased with grant funding from the Secretary of States Help America Vote Act grant program.

“I applied for the grant and we received $3,900, enough to purchase these signs for the polling places, as well as cardboard privacy dividers to replace the heavy plywood ones,” Mims said.

Statewide and countywide candidates will be on the ballot Tuesday. Voters must choose whether to vote in the Republican or Democratic primary. The general election will be held in November.

Among the biggest county races are the sheriff’s race. Republicans Heath Jackson and Lloyd Albritton will vie for a chance to face Democratic incumbent Grover Smith on the November ballot.

Sample ballots for the Republican and Democratic primary can be found here: