Cook, a 2009 graduate of T.R. Miller, also completed his first season as a college football player with the Lions.

After graduation last year, Cook along with his parents Mabry Sr. and Marty, moved to Alexander City.

“I spent most of last summer on the lake or at the beach enjoying family and friends,” Cook said. “Also, to help prepare for college football I worked out with Blake Shaffer, a buddy of mine from Alex City. In July, I competed in the Alabama North-South All Star game in Huntsville and I played linebacker for the South team.”

Cook said his first year of college football was a great learning experience as he got to play with some very good athletes.

“A couple of UNA seniors actually signed with professional football teams,” Cook said. “Coach Terry Bowden decided to red shirt all incoming freshmen so I didn’t get any playing time during the regular season last year. I was recruited by UNA as a linebacker but our team needed a scout team tight end so I stepped up and took on that task.

“I worked hard at tight end to give the starting defense the best look possible every week.”

During spring training, Cook said the team needed a tight end again, so once again he accepted the challenge of playing a different position and did the best he could and was able to work his way into some playing time.

“Early into spring practice I fractured my right hand, but I got a cast put on so I could continue to play and I actually caught a touchdown pass in one of the scrimmage games,” Cook said. “Currently I am playing tight end for UNA and I am looking forward to competing for playing time this summer and fall.”

Coach Terry Bowden accepted the position of head coach at UNA in December before Cook signed with the team in February 2009.

Cook said the former Auburn coach and son of legendary football coach Bobby Bowden brought a lot of excitement to the UNA football program and the community.

“Obviously the Bowden name is a very well respected name in college football and I feel very fortunate to be playing for Coach Bowden, as well as his brother Coach Jeff Bowden,” Cook said.

While Cook has worked his self into getting some playing time in college, he said college football is very different than high school.

“All the players are bigger, faster and stronger,” Cook said. “I’m actually playing with guys that are 23 years old. There is a big difference when you play against a 16-year-old and a 23-year-old. Also, the overall attitude of college ball is more like a job. We spend more hours each day practicing, meeting, working out and watching game films than in high school.”

This past season, the Lions finished the season 11-2 and won the Gulf South Conference championship title.

As to what advice he would give a high school player wanting or going to play football on the collegiate level?

“Be prepared to work hard and remember you are a student-athlete and “student” comes first,” Cook said.

Cook says his plans for right now is to work hard inside and outside the classroom and prepare to be the best tight end he can be, but he will never forget his roots of Brewton and T.R. Miller.

“I love being at the University of North Alabama and cannot imagine going to college anywhere else,” Cook said. “I am absolutely where I’m supposed to be. I will never forget how fortunate I was to be a T.R. Miller Tiger and a part of the Brewton community. Coach Jamie Riggs and the entire Miller coaching staff helped me prepare for life on and off the football field. That may sound corny but it’s absolutely true. I will never forget the work ethic and team mentality they drilled into me.” 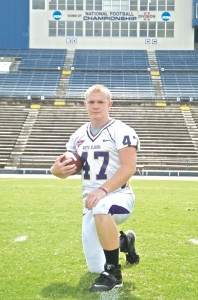