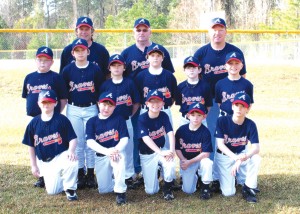 Benefiting from a third inning in which they drew six walks, the Braves – who battled the Astros all season long for the regular-season title – were able to claim the city championship with the exciting one-run victory Tuesday night in Brewton, 7-6.

The win for the Braves didn’t come without some nail biting.

The Braves had a seemingly comfortable 7-0 lead going into the final inning, before the Astros put together a furious comeback that came up just a run short.

The inning came up short with the tying and winning runs stranded on second and third bases.

Russell Smith, coming back from a three-week absence due to a broken finger on his pitching hand, didn’t give up a run and got the win.

At the plate, he was equally impressive, booking a perfect 3-for-3 night with a pair of RBIs.

Steven McCall and Lyon Jernigan each had a double for the Braves.

The Astros were led at the plate by Daniel Blair and Terrence Hall – each of whom had a pair of hits.

Davis Wade, Micah Flores and Joseph Nance each had a hit as well.