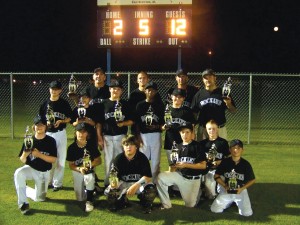 The Yankees added one run of their own in the bottom of the inning to cut the lead to 6-2 but that would be their final run of the night while the Rockies added three in the fourth and three in the fifth to get the win by 10.

Kellyn Winn earned the win on the mound for the Rockies as he allowed two runs on six hits, walked none and struck out eight in the complete game.

For the Yankees, Blake McGraw got the start and the loss on the mound as he allowed six runs on seven hits, walked two and struck out three.

Bryce Booker and Dakota Graves pitched in relief of Winn.

Booker allowed three runs on no hits, walked three and struck out none.

At the plate for the Rockies, Hunter Brittain was 2-for-3 with a double and one RBI.

River Johnson was 2-for-3 with a triple and one RBI and Chris Gehman was 1-for-3 with one RBI.

Trippe Floyd was 1-for-1 and Alex Daughtery was with three RBIs.

For the Yankees, Andrew Langham was 2-for-3 and Dalton Shell was 1-for-3 with a double.

Colton Morris was 1-for-3 and McGraw was 1-for-2 along with Booker.

Morris and McGraw had one RBI each in the loss for the Yankees.

The Rockies made five errors in the win while the Yankees made four.

The Rockies took advantage of two walks, three errors and four hits to jump out to a first-inning 8-0 lead and never looked back. The win propelled the Rockies to the championship game of the City Tournament.

From there, the biggest blow came when the league’s top two home run hitters – Hunter Brittain and Kellyn Winn – went back-to-back. Winn was first, and crushed a three-run bomb, and was followed by Brittain’s solo shot. Winn finished 3-for-3, while Brittain was 2-for-4.

Jake Najor (3 runs scored) also had a good night at the plate with a 3-for-4 effort while Christopher Gehman added a pair of hits. O’Neil White had a big two-run double, and Alex Daugherty, River Johnson and Trippe Floyd each had hits.

For the Tigers, Jordan Williams, Will Smith (2B), Ethan Bollenbacher and Markail Mitchell (2B) had their team’s only hits.

With the regular-season champion Brewers struggling at the plate, the Yankees took full advantage of a tremendous pitching performance from Colton Morris and several great defensive plays to advance to the finals of the City Tournament.

Morris held the meat of the Brewers’ order to just two hits in 13 at-bats, and then failed to give up but one run despite the fact the Brewers stranded 10 runners on base, including six in scoring position. Morris allowed but five hits while striking out 10, and put an exclamation point on the win by crushing a two-run home run in the sixth inning to put the dagger in the heart of the Brewers.

Other than Morris’ heroics, the Yankees got two hits from Dakota Graves and an RBI hit from Dalton Shell.

In addition, Shell made two amazing defensive plays at shortstop, including a diving catch of a line drive to his right.

The Brewers were led at the plate by Joshua Winton and Tyler Hoomes (RBI 2B), both of whom had two hits.

Brooks Brown, Ethan Tyree and Dakota Stokes had the other Brewer hits in the game.