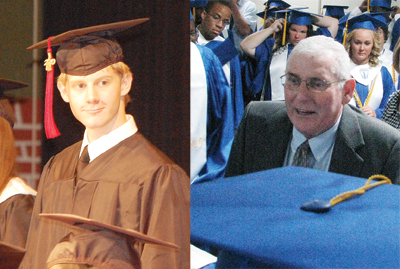 Friday night ended one 12-year wait for Austin Collins, but he is now playing a different kind of waiting game.
Collins received a standing ovation as he crossed the stage to graduate from T.R. Miller High School — and words of praise from fellow classmates for his courage.
Collins is on a list at the University of Alabama at Birmingham Medical Center to receive a heart transplant and just received his doctors’ permission Thursday to leave his hospital room to join his classmates for graduation.
Susie Ivey, Collins’ mother, said the need for a new heart came when doctors discovered his heart was enlarged.
The walls of the chambers in his heart have thinned and Ivey said the problem may have been ongoing for some time, but suspects the problem may have stemmed from a bout with mono two years ago.
Collins said his plans for graduation night were simple — to walk across the stage.
“It feels great to be home,” Collins said Friday. “I’ve waited on this for a while and I’m going to graduation. I’m going to walk across that stage.”
Collins said his classmates are excited about his joining them for the milestone event.
“I’ve talked to some of my classmates since I’ve been home and around town,” Collins said. “They are excited I’m here but they can’t be any more excited than I am.”
T.R. Miller student Michael Lee Tran, in his welcome to parents and family members at graduation, singled out Collins as an inspiration to his fellow classmates.
“We’re all glad that he is able to join us today,” Tran said. “He represents our class through strength and courage.”
Tran said classmates admired Collins’ “spirit of never giving up.”
Ivey said her son is doing well under current treatment from doctors at the University of Alabama Medical Center in Birmingham who are preparing him for a heart transplant.
“He’s doing really well,” Ivey said. “With the medicine’s he has been on he’s doing good. The doctor’s met and discussed his case and decided he was stable enough to go home for a little while.”
Collins was welcomed home by his immediate and extended families along with several friends, Ivey said.
“We have got such a great support system,” Ivey said. “We had a lot of family at home when we brought Austin home. With all of our family and our church family and so many friends that have been supporting us, we’re just blessed.”
Collins won’t have a lot of time at home before he’s needed back in Birmingham to meet with doctors handling his case, Ivey said.
“We were so surprised to be able to get to come home even for a little while,” Ivey said. “Austin has to go back to Birmingham on Thursday to clinic. If he’s doing well they may extend his time away from the hospital.”
While the family enjoys their time together in Brewton, Ivey said she’s playing the waiting game with her son.
“We’re just waiting on that one call,” Ivey said. “When they told us we could come home they said we had to be assessable. We have a very small window to get back to Birmingham if that call comes in.”
Although Ivey is concerned about her son’s future, she is not experiencing anxiety over their situation.
“This isn’t the first time I’ve done this,” Ivey said. “Nine years ago I waited on that same call for my daughter. I’m not worried because I know that God will take care of everything. I gave my children to God a long time ago and I know He will see us through.”
Ivey said the power of prayer has brought her family comfort and a lot of new friends.
“We have been lucky to meet some wonderful because of prayer chains,” Ivey said. “I got a card from a lady in Thomasville who had heard about us through prayer chain. She said ‘don’t be surprised if I come see you’ and she did. We have had pastors from Birmingham come and visit with us. It’s been really awesome.”
Ivey said her son is currently at 1B status, which puts him around the middle of the list for potential heart transplant patients.
“He’s doing well and they’ve got him at 1B right now,” Ivey said. “We’re just waiting and hoping for that call.”

W.S. Neal High School Principal Phillip Ellis returned to the one of the great loves of his life Friday night. His goal was to present diplomas to the graduating class of 2010.
Amid applause, tears and a standing ovation, Ellis addressed those in attendance with words of thanks and praise.
“The one thing that got me on this stage tonight was the prayers prayed for me,” Ellis said. “Your help got me back.”
Ellis, who was diagnosed with multiple myeloma last year and has battled against the disease since then, facing death twice in recent months, made his return to W.S. Neal for the special occasion.
Ellis’ wife, Saundra, said there was never a question about whether he would be at graduation.
“He never said anything about not coming to graduation,” Saundra said. “It was always his plan to be here for these students.”
Ellis made an extra effort to speak to the students prior to graduation.
Ellis gave his traditional informal talk to the students before their walk into the auditorium, encouraging them to savor the moment.
“Just look around you tonight,” Ellis said. “This is the last time you’ll see every one of us in one place. There are 84 of us tonight, and we won’t all be together as a group again.”
Ellis also thanked the students for their work and dedication to themselves and to the school.
“I appreciate all of ya’ll,” Ellis told the students. “Your hard work has gotten you here tonight.”
Following addresses by the class valedictorian and salutatorian, Ellis once again addressed the graduating seniors.
“It is an honor and a privilege to be in front of you tonight,” Ellis said. “The high point of our year every year is graduation. The high point for me is to be in front of you and see your faces as you graduate.”
Following a standing ovation from the audience, students, faculty and staff, Ellis moved on the platform in preparation to present diplomas to each of the 84 graduating seniors.