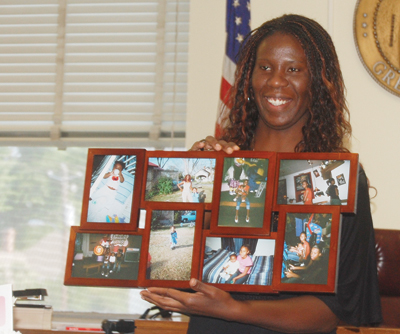 With their mother Tammie Bell looking on with pride, twins Lakrisha and Tynesha sang a hymn for those gathered Friday in a small Escambia County courtroom.

“Let the sweet aroma of worship fill this room,” sang the girls, who would graduate from middle school later that day.

But the girls were just as proud of their mother, who graduated herself Friday morning from Escambia County Family Drug Court. Bell is the second graduate of the program.

“I want to thank my family and my children,” Bell said. “But first I want to thank God. If it wasn’t for Him, I wouldn’t be here. God pulled me out of the streets.”

Family drug court is a quasi-civil court. Participants are not charged with a crime, but they are in danger of losing their children because of substance abuse problems. The court, which is in its third year, is headed by District Judge Dave Jordan and is a partnership of his court, the Department of Human Resources, Hope Place Family Resource Center and Southwest Alabama Mental Health.

Jordan said those partners are necessary to help fulfill the court’s mission — judicial intervention, treatment and improvement of parental abilities. DHR refers participants to the court.

Bell said her struggle with drugs and alcohol began when she was a teenager — and started simply.

“At the age of 19, I entered the world of addiction,” she said. “It starts with a cigarette and a sip of wine cooler. I was at the end point, and God sent me an angel, Mrs. Irene.”

Irene Johnson is the coordinator of family drug court. She credited Bell’s strength with getting through the program.

“The last two years have been tough, they’ve been a tug of war,” Johnson told Bell. “But you’ve come a long way. Tammie has matured. She’s been working for over a year, and she has six beautiful children and a home. We see the change in her. We thank God for it.”

Bell said she knew that her life had to change.

Jordan praised the change in Bell. “This strong, young, beautiful woman is not the same woman who was here two years ago,” he said. “What Tammie did was change. She did that through the power of God. Now you can be the mother that God intended.”