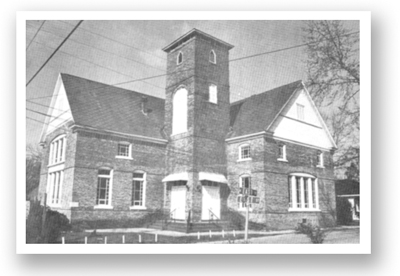 Worshippers have gathered at Second St. Siloam Missionary Baptist Church for 100 years, and the church will celebrate its centennial with a special service June 13 — including the dedication of a historical marker.

The church has been named to the Alabama Register of Landmarks and Heritage, an official listing of buildings, sites, and structures worthy of preservation. Sites may be of national, state or local interest and carry no restrictions or financial incentives.

Unlike the National Registry of Historic Places, which is a federal program administrated by the U.S. Department of the Interior, the Alabama Register was created by the Alabama Historic Commission to provide a quick and easy way to gain recognition to historical properties. A place has to have been at least 40 years old.

Second St. Siloam Missionary Baptist Church has been listed in the Alabama Registry because of its architectural significance as well as its being 100 years old.

As a place of worship that has stood for 100 years in the Brewton community, the church features a unique design. The interior core forms a cross with a three side cathedral balcony, ceiling, and bell tower. The church retains a lot of its original features.

“We began discussing doing this last fall,” said church member, Emma Lancaster. “I had attended a dedication somewhere else and thought it would be good to try to do. We formed a historical committee in the church. We also heard about the city of Brewton’s plans for celebrating its 125th anniversary and thought it could all tie in. Our church was dedicated in June of 1910, so even the timing was right.”

The AHC sent a team to Brewton to view the church, and Lancaster and church members gathered the paperwork needed to get the church on the registry.

Beyond its unique architectural features, Second St. Siloam has a rich history in Brewton.

Jacqueline Blue, wife of the pastor, the Rev. Willie J. Blue, has been a member of the church for many years, and before that her parents and grandparents were also members. She said she could remember hearing her grandmother talk about carrying blocks or bricks to help build the church.

Her grandmother also remembered when the parent church of Second St. Siloam was located on the banks of Murder Creek below where Brewton Iron Works and Citation are now.

On Nov. 5, 1909, a group of worshipers gathered in the Congregational Church on the corner of St. Joseph and Evergreen avenues and organized the Second St. Siloam Missionary Baptist Church. On June 10, 1910, the congregation dedicated the new church, which is located on the corner of East and North streets.

Lancaster said credit is given to the Rev. Williams Franklin, the church’s first pastor, with visualizing the church’s unique architectural design, which is based on the cruciform plan and features a balcony which, while being only a few feet wide, makes several turns around the church to make seven different sections surrounding the regular sanctuary.

“We had maybe 150 people in our congregation to start with,” Pastor Willie J. Blue said. “We now have around 560 but some of them do not attend on a regular basis. Now that we have come this far, it would be nice and go ahead and try to get placed on the national register, but we may have trouble getting that. In the mid 1970s we tied the educational annex to the church, and that may keep us from getting on the national list. It is very strict about any changes being made to the original building.”

Another change that has been made is in the bell tower. It once stood one story higher, but it was removed when the bell was removed. The bell now rests in a place of honor in front of the church.

The church and its congregation are inviting anyone who has had ties with Second St. Siloam in the past to join them June 13. The unveiling of the new marker will take place after the 11 a.m. worship service, when all attending will be asked to assemble outside for the dedication.