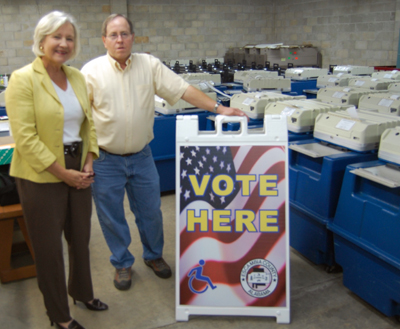 Voters will go to the polls in Escambia County and across Alabama today to select party nominees for statewide and countywide offices.

In Escambia County, two Republicans are on the ballot seeking the nomination to face Democratic incumbent Grover Smith for sheriff. Heath Jackson, a Brewton native and former member of the local drug task force, now works in a similar capacity in Pensacola, Fla.

Lloyd Albritton of Atmore served as a criminal investigator in the U.S. Army and is a retired businessman working in manufacturing, telecommunications and financial services.

In the state Senate District 22 race, two Republicans will face off for the chance to be on the ballot against Democratic incumbent Marc Keahey, who has held the seat since winning a special election in 2009. Jeff Peacock, an Atmore businessman and chairman of the county’s Republican party, is on today’s ballot along with Danny Joyner of Brewton, who sought the seat last year but lost the primary to Greg Albritton. The seat came open last year when state Sen. Pat Lindsey died while in office.

In other local races, the District 4 school board race is crowded with candidates seeking to replace school board member Richard Hawthorne. Hawthorne faces trial soon on ethics charges related to his job as a jailer in the county. Two Republicans — Cindy Jackson and Monica White Shockley — will face off, while three Democrats are on the ballot — Stephanie Agerton, A.G. “Bo” Brantley and Joseph Hutchcraft.

In the governor’s race, Democrats Artur G. Davis, a U.S. representative, faces outgoing agriculture commissioner Ron Sparks. For the Republicans, seven names are on the ballot, with Bradley Byrne, Tim James, Robert Bentley and Roy Moore expected to battle for a spot in a runoff.