From an ‘unbelievable’ suturing technique to dissecting a cadaver, W.S. Neal athletic trainer Antonio Davis thought he wanted a career as an orthopedic surgeon.

But that decision changed after observing the ‘power’ of athletic training.

Davis, 24, is from Hattiesburg, Miss. After graduating from Hattiesburg High School in 2004, Davis went on to the University of Southern Mississippi to pursue a career in Sports Medicine.

“I was introduced to Sports medicine through an allied health program in high school, Davis said. “In 2004, I was the only high school student selected from Mississippi to attend the National Youth Leadership Forum on Medicine at Tulane University. This forum taught me how to pursue a career in healthcare. I felt alive and energized and even got a chance to practice what I thought was my unbelievable suturing technique, as well as dissecting a cadaver.

“From that time until my sophomore year in college, I thought I wanted to be an orthopedic surgeon.  My decision changed when I observed the power of Athletic training.”

From there, Davis has seen many experiences in his short career in the field of athletic training.

“My clinical experiences have been diverse,” Davis said. “My most exciting experience as a college student, was interning with the NFL Washington Redskins.  For the past two years, last year makes my third, this team has allowed me to work with their athletes and trainers.

Davis has interned for the Washington Redskins for the past two years, working training camp through pre season.

Many athletic trainers never get that opportunity because the position is very competitive, Davis said.

“Last year, only four of 450 applicants were chosen to work,” Davis said. “The job requires hard work and long hours. I worked about 13 hours a day for seven days a week. Though the hours were long, it did not outweigh the benefits. I learned a lot about new modalities that help speed up the recovery process for injured athletes.

“I learned new techniques to help athletes return to play faster.  I also got a chance to spend some of the athletes’ money.”

From there, Davis was hired as a trainer at W.S. Neal.

“Everyone always asks me how did I get to W. S. Neal,” Davis said. “I got back from the Washington Redskins at the end of September.  Two days after I got back, my athletic training director contacted me about the opening through Encore Rehabilitation, who is a major sponsor of sports medicine in Mississippi and Alabama. I was kind of hesitant because I did not want to sign any contracts because my plan was to attend physical therapy school within one year.

“ I interviewed and received the job. I have been working for Encore as an athletic trainer since October.”

“The first thing you notice about Antonio is the way he presents himself,” Jordan said. “He dresses professionally and carries himself with confidence. He made a great first impression. It took only a few minutes speaking with him to realize he would be a great addition to our staff.

“He’s worked with the Washington Redskins in the NFL. He’s worked on the training staff at the University of Southern Miss. He’s just an impressive individual. It was an easy choice on my end.”

Jordan said Davis works hard at what he does for W.S. Neal.

“He’s at every athletic contest at W.S. Neal,” Jordan said. “He sometimes jumps around of course, attending various athletic events on the same day. He’s at every workout, every practice. The kids respect him and enjoy being around him. As coaches, he’s been great addition to us as well. He really fits in well.”

Jordan also said with Davis being on staff full time, it is a big thing for him and the other Eagle coaches.

“This was the big thing for us as coaches,” Jordan said. “Having a full time trainer on staff is so important. We no longer have to guess at injuries. When kids are injured, Antonio takes care of it. Obviously, the risk of injury is still there.

“But the ability to diagnose and treat the injuries on site is very important to the safety of our athletes.”

Davis, who works for D.W. McMillan Hospital in Brewton and Encore, said the best part of his job is seeing an athlete going through the full rehabilitation process.

“It bothers me because D.W. McMillan has one of the best physical therapy clinics in the state and our orthopedic doctors are highly trained professionals.”

While Davis has seen many different injuries and some nasty, he says it does not scare him to know that when an athlete is injured on the field his or her life is in his hands.

“I think my college athletic training program well-prepared me for life and death situations,” Davis said. “When an athlete goes down, I automatically zone out any distractions and focus on what I need to do to help the athlete. The number one injury that I see is sprains and strains. A sprain is simply stretching of a ligament beyond its normal range.

“A strain is the same but with a muscle or tendon. These injuries can be prevented through warming up properly and cooling down properly.  Also weight training that develops the muscles that are used in routine activities helps.”

One of the worst injuries Davis said he has seen was the incident this past baseball season at W.S. Neal when pitcher Gary McGraw was struck in the head with a line drive.

“The craziest injury/non-injury situation I have worked with was when I worked with my college track team,” Davis said. “One of my athletes was complaining about her stomach hurting before her race. I gave her some medicine. She started her race in first place and right before the finish line she ran off the track and sat down with her legs closed. She looked into the stands and just stared at me and the certified athletic trainer.

“When we ran down to see what was going on, she smiled and said ‘I just took a massive poop in my pants.’ We all laughed and got her a towel so she could go clean up. No wonder she was running so fast!”

Davis said his favorite sport to work with is football.

“I like the fact that you never know what injury you are going to get when you go out to the field,” he said. “It keeps me focused and ready. I played football growing up so I know the game a little better than other sports. Plus, everyone loves a little physical contact.

“My least favorite sport to work is tennis because I do not know as much about the sport as others. I love to play but I do not really care for watching other people play.”

Of all Davis’ work experience, Davis said he enjoys working high school but not nearly as much as working for a professional team.

“When you are working in the professional field you have more supplies to work with,” Davis said. “You have doctors at your request at all times. You can talk directly to the athlete and not have to go through parents. Professional players tend to want to get better while many high school athletes are indecisive about playing again if they get injured. High school does have its benefits as well. I enjoy taking care of an athlete who has been injured for the first time.

“Also, the hours are not nearly as bad for high school, but the athlete will never forget who helped him or her with his first real injury.” 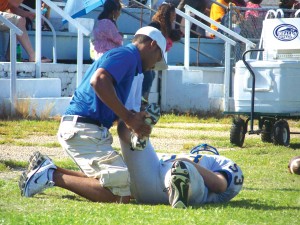