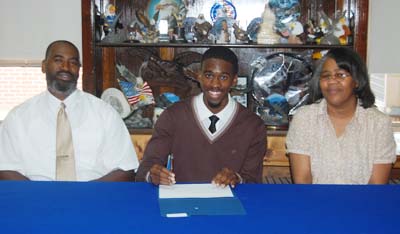 Bob Elliott II is flanked by his parents Bob and Bernita Elliott as he signs a track scholarship with Samford University.

But the track star — who earned the state championship in triple jump this past year — has signed with Samford University, where he will compete in triple jump and high jump.

“I’ve been working towards this during the season,” Elliott said during a signing ceremony at Neal Wednesday. “Before the season I was just running to be running.

Elliott, who also played basketball at W.S. Neal, said he plans to study nursing at Samford. He picked the school because he felt comfortable there and like the coaches, he said.

“I liked the way I felt when I got on campus,” he said.

Parents Bob and Bernita Elliott said they were “very proud” of their son’s accomplishment.

Elliott’s coach at Neal, Rebecca Jordan, is herself an alumna of Samford, where she also held a track scholarship.