Guard to deploy: Local unit has January mission to Afghanistan

The last time the 1165th Military Police Company was deployed in a war zone, many of its current members weren’t old enough to serve.

“We’ve got a lot of kids,” commander Sgt. Frank Barnes said. “But in saying that, they’re good.”

The company — which is based in Fairhope but has 56 members based at the Brewton unit — will begin a mission to Afghanistan in early 2011. The deployment is scheduled to begin Jan. 2, with the National Guard members spending a few weeks at Camp Shelby near Hattiesburg, Miss., before heading to Afghanistan.

The 1165th spent 15 months — three months longer than its original mission was scheduled for — in Iraq in 2003 and 2004. The company received several honors for its service, including the Presidential Unit Citation, the highest military honor a unit can receive.

A handful of members who went to Iraq remain in the unit, Barnes said. But despite their youth, they are ready to serve, he said.

“This platoon is the best in the state,” he said. “I’m blessed they make my job easy. You can tell them to climb up that wall, and they’ll do it. They really want to be here.”

With the United States engaged in two wars for several years, troops have remained at a high readiness level, Barnes said.

The local 1165th unit has been regularly training every month, but those sessions will intensify in the months before the unit’s deployment.

“We’ve been going once a month on three- or four-day trips,” Barnes said. “We’re really fixing to ramp that up. We have a six-day and seven-day drill coming up.”

The Brewton unit trains longer hours than most units, but Barnes said the time is worth it.

“We have to keep that readiness edge,” he said. “This is the best bunch of soldiers I’ve ever been around.”

National Guard members have to maintain a balancing act between their lives back home and their monthly training missions and deployments.

“I don’t know how they do it,” Barnes said, “how they can just step out of one role and step into another role, and never miss a beat.”

When the unit returned to Brewton from Iraq in 2004, many of the members left Guard service for various reasons. “We’ve taken two or three years to build our strength back up,” Barnes said.

In Iraq, the main mission for the MP company was to train local police officers and open police stations. In Afghanistan, the mission will focus on personal security, mainly for dignitaries visiting the war zone.

Barnes said he believes the unit’s closeness will help not only the troops who are deployed but their loved ones back home.

“One thing that sets us apart is we’re a family,” he said. 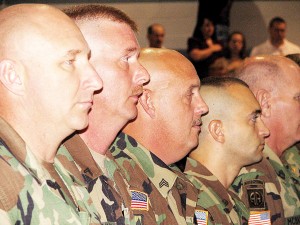 file photo | The Brewton Standard Members of the 1165th Military Police Company, which is based in Fairhope but has a unit in Brewton, are scheduled to be deployed to Afghanistan in January.