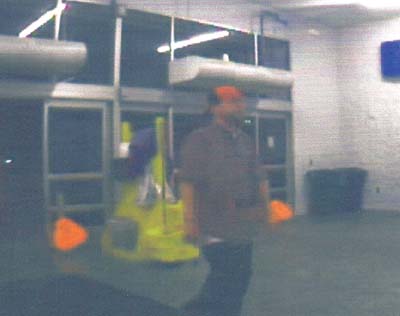 Brewton police are searching for a man they say accosted two girls in a local store.

Police say the man — whose image was caught on surveillance video — trailed two teenage girls at the Walmart Supercenter Tuesday night. Officers are hoping someone will recognize the man in the video.

Brewton Police Sgt. Steven Ferguson said officers responded to a call and talked with the girls, aged 15 and 16.

“The girls said the man stopped to talk to them,” Ferguson said. “He then hugged the girls and used some inappropriate language with them. He tried to get them to leave with him, but the girls were uncomfortable with the way he acted, so they walked away.”

Cameras at Walmart show the man followed the girls about 30 minutes inside the store, and when they left, he left, too, Ferguson said. The girls got away from him and called the police department.

Ferguson said the man was wearing dark clothing and a baseball cap turned backwards. The cap was orange and some dark color.

“He either had a beard or a goatee,” Ferguson said. “He left the parking lot in a dark colored Impala, and there was another guy with him. The cameras in Walmart caught the man on video in several locations following the girls around.”

Ferguson advised anyone who can identify the man to call him, Sgt. Rodney Brand or Lt. Eric Suarez at the police department, 867-3212.

Ferguson also offered some advice to anyone who finds themselves in a similar situation.

“If you are outside, go into the closest store, find an employee and tell them what is going on; then wait for the police,” he said. “If it happens somewhere like Walmart, either tell an employee or go to the customer service desk and tell one of the employees there what happened. Don’t leave the store and go into the parking lot. It’s much easier to get to you outside than it is if you stay inside.”