“When I visited Samford, I first stepped on campus and looked around and it felt good,” Elliott said. “The campus isn’t huge, but it’s not to small either. I met the head coach Rod Tiffin and he went on to talk about what all he has accomplished while coaching. He showed us pictures of jumpers he has coached in the Olympics and things like that.

“I also met the assistant coaches Diego Flaquer and Lori Strand along with several athletes on the track team. They all were really nice and respectable. Samford feels like a good fit for me.”

Bob got attention from the schools because of his state-winning distance in the triple jump.

“It was 10 inches farther than the second place winner,” Jordan said. “So that is quite significant in jumping.”

Jordan said Samford is a challenging school academically, but Elliott is smart and a hard worker, so he will do well.

“Samford really sets students up for success, providing them with any support they might need,” she said. “I have a lot of amazing memories from Samford, not only from an athletic standpoint.  I met my lifetime best friend at Samford, and left with an exceptional education. It is exciting to think that Bob will experience these things, too. Bob is a dedicated athlete and student, the type that is perfect for Samford.  I can say now that I think he made the best college choice.”

Elliott, 17, went to W.S. Neal ever since kindergarten.

“I couldn’t see myself graduating from any other school,” Elliott said. “I’ve met a lot of cool people, and a couple good friends. I don’t talk much, I keep to myself for the most part. But when I do go out me and my friends have lots of fun. I think seafood is the best food known to man.”

Along with track, Elliott also starred on the Eagle basketball team.

“I been playing basketball for as long as I can remember,” Elliott said. “I first started playing official basketball way back in 2003 and have been playing ever since. My first year of track was in the 8th grade. I skipped my freshman year and continued with 10th on out. I really can’t tell you what I like about basketball I just love the sport.

“Track on the other hand lets you show off your athletic ability. Everything is on you, for the most part it isn’t a team sport.”

“Its fun when you and a bunch of friends playing just for fun or your up against different opponents competing for something, its all is just really fun,” he said. “My greatest memory while playing basketball would have to be my whole junior year because it was so exciting.

“From the gym being loud and packed to every time you turn around, one of us is dunking. In track it would have to be winning the state championship, it got even better when one of my best friends won a title too.”

This past track season, Elliott won the state championship for triple jump.

“I can’t describe how it felt to win a state championship especially finding out my jump would have won from 5A down to 1A,” Elliott said. “Also it was third in the entire state 1A-6A. It just felt really good.”

While there are many goals he has for himself, Elliott said that with God first, the sky is the limit.

“Sports wise, I’m looking to learn more about my events and peruse winning a conference championship or even a NCAA championship,” Elliott said. “Academic wise my goal is to get a degree in nursing and maybe even take my education further than that.”

Elliott is the son of Bob and Bernita Elliott. 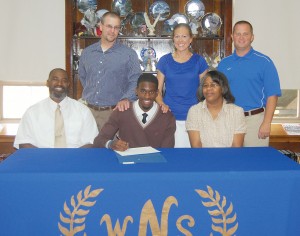