A two-vehicle accident on Foshee Road this afternoon injured one person and shook up two others.

Around 2 p.m. an accident involving a Toyota SUV and a Ford Mustang sent the driver of the Mustang to D.W. McMillan Hospital with injuries not believed to be life threatening according to witnesses at the scene. 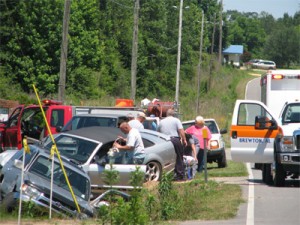 Ambulance workers assist the driver of a Ford Mustang injured in an accident on Foshee Road Monday afternoon.

The driver and occupant of the SUV refused treatment at the scene of the accident according to officials at the scene.

Details of the accident were not immediately available.