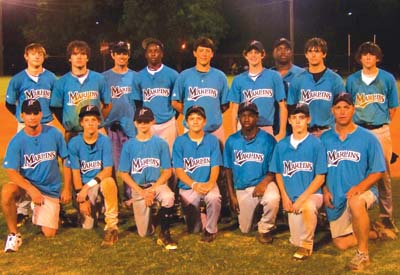 The Brewton Babe Ruth Marlins ended their 2010 season with a perfect undefeated record of 12-0 with a 7-1 win over the Royals Tuesday in Brewton.

The win for the Phillies also ended their season at 6-6, but they had to settle of third place as the Royals had the advantage over them head-to-head.

The loss for the Brewers finished them with a 1-11 record and fifth place.

The idle Astros ended their season Monday night with a 5-7 record after losing to the Marlins 15-2.

In a resumed makeup game from earlier in the season, the Phillies and Brewers played to extra innings in their regular season finale with the Phillies winning 2-1.

Both teams were held scoreless until the top of the eighth inning when, with two outs, Rob Stokes reached on a walk and Zac Griffin’s single put runners on first and second.

Zac Haveard then reached on an error plating Stokes for the eventual game-winning run.

With the Brewers still having a chance to win in the bottom of the inning, a leadoff error and a sacrifice put the tying run on third base.

A walk and an intentional walk to load the bases followed but the Phillies hung on for the win.

William Whittle earned the win on the mound for the Phillies and Stokes earned the save.

Whittle went 1 1/3 innings allowing no runs, no hits, walked one and struck out three. Stokes went the final 2/3 inning walking two and striking out two.

At the plate, Stokes was 1-for-3 and Griffin was 2-for-4. Jacob Fillmore was 1-for-3 with one RBI prior to Tuesday’s resuming of the game. Tyler Joyner and James Peach were both 1-for-3.

For the Brewers, Wes Maddox took the loss in relief of starter Ryan Hunt. Hunt went seven innings and Maddox went the final inning allowing one run, not earned, one hit, and walked one.

Already having the regular season championship under their belts, the Marlins were one win away from finishing the season undefeated with a 12-0 record.

With the game tied at 1-1 after the top of the fourth, the Marlins scored two in the bottom of the inning, three in the firth, and one in the sixth inning to get their perfect undefeated season with a 7-1 win over the Royals in the nightcap Tuesday in Brewton.

Jeremy Myers earned the win on the mound for the Marlins as he went the complete game and allowed four hits, one run, no walks, and struck out 13.

At the plate for the Marlins, Hunter Mullins was 2-for-3 and Myers was 2-for-4 with two RBIs.

Miles Powell was 1-for-2 and Lowell Swain was 1-for-1 with a double and an RBI.

At the plate for the Royals, Christian Purvis and Caden Lodge were both 1-for-3 with Lodge having one RBI.

Chris Jones was 2-for-3 with a triple to lead in the loss.