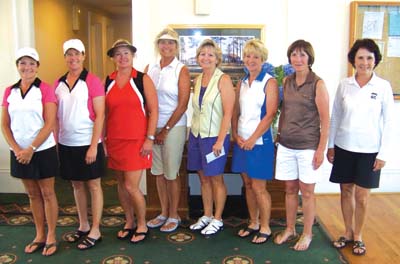 A total of 96 ladies made up six different flights.

Winning the championship flight was Laurie Strite and Lisa Graham with a 68 followed by Jill Martin and Jane McMillan in second (69), Charlotte Wheeler and Bonnie Cook in third with a 70 and Andy Duchesne and Nancy Welch in fourth with a 72.

In the first flight, Cindy Lee and Sandy Cannella won with a 72 followed by Sue Doyle and Tish Wynn with a 75, Susan Hirsch and Carolyn Whitman in third with a 76 and Katy Hyland and Jan Arrington in fourth with a 79.

In the second flight, Barbara Wilkerson and Terry Pierson took first with a 75 followed by Mary Shirley and Cheryl Najor with a 77, Nan Wilson and Evelyn Turner with a 77, and Melanie Morris and Shirley Hager in fourth with a 78.

In the third flight, Lavyon Duncan and Betty Bryant led with a 73 followed by Ava Rich and Elsie Bass with an 81, Wynene Youmans and Dean Morris in third with an 82, Shatzi Clemons and Karen Feliciano in fourth with an 82.

In the fourth flight, Sandy Cowling and Johnnie Fleshman won with a 78 followed by Deb Burns and Barbara Hudson with an 80, Gail Zwirblia and Bonnie Hochmuth in third with an 83 and Judy Brown and Vaudean Watson in fourth with an 83.

In the fifth flight, Maurie Harvey and Sandra Johnson won with an 83 followed by Kate Owens and Karen Reynolds with an 86, Mary Adams and Jean Wiggins with an 87, and Betty Kincaid and Earline Locke in fourth with an 89.