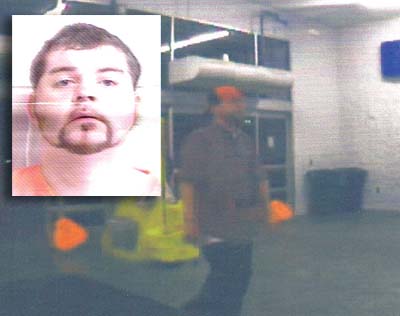 After The Brewton Standard published a surveillance photo provided by police, officers received a tip about the man’s identity.

The caller believed the subject was a man by the name of Jeremy Adams.

“We then ran his name through our system and obtained a photograph,” Brewton Police Sgt. Steven Ferguson said Thursday. “We took it to Walmart, where several employees were able to identify the man. One of the girls who had been accosted was also able to identify him. The other girl lives in Monroeville, and she has not seen the photograph yet.”

Officers went to the home of Adams, who lives in Brewton, and then to his workplace in Castleberry, where he was arrested. He was arrested and charged with two counts enticing a child to enter a vehicle.

The two teenagers had reported to police on June 2 that they were harassed by a man in the store.

“The girls said the man had stopped and talked with them,” Ferguson said. “The girls were also hugged and inappropriate language was used. He followed them throughout the store and when they left, he followed them outside where he tried to induce them to get into a car.”