The fifth annual Brewton FCA camp for grades first through sixth will be held Monday, June 28 through Thursday, July 1 at T.R. Miller High School and the Brewton Area YMCA.

The FCA Camp is designed to help give children who have completed 1st grade through those who have completed 6th grade an opportunity for a Christian camp environment that balances both athletic competition and character/integrity development with the message of Jesus Christ.

The camp is staffed by high school athletes and coaches who have a love for athletics and children.

FCA has been touching millions of lives since 1954. It has been challenging coaches and athletes on the professional, college, high school, middle school and youth levels to use the powerful medium of athletes to impact the world for Jesus Christ.

FCA is the largest Christian sports organization in America.

Locally, Randy Winton with Brewton’s First Baptist Church heads up the camp for the week.

Winton said the camp is two-fold as it gives the kids that opportunity, but it gives our teenagers the opportunity who are Christian teenagers and the ones trying to do the right thing to be examples to younger kids.

“We have kids who are using gifts they didn’t know they had until they got in a group with sweaty first through sixth graders,” Winton said. “We expect excellence in our kids. In this community we expect great athletics, we expect them to be great academically and musically. But in all these areas in our lives and the success that this community has seen and what has brought the spotlight on this community, what I worry about is that we don’t expect excellence in their spiritual life.

“So this is an opportunity that challenges us and by the end of the week it’s great to watch that development.”

Winton says that the number one goal is through this athletic focused event, some kid is to come to know Christ and to know that he is valued.

During the camp, each age group has a camper of the week and that means that they have been a great camper, teammate for that week.

Huddle leaders are assigned to the age groups during the week and serve as coaches to the kids.

Six stations are played daily on a 15-minute rotation and accumulate points due to winning, losing, or tying.

Last year, the camp started the Jim Hayes Award with Jones Manning being the first winner of the award.

The T.R. Miller football player told his family and friends the camp changed his life.

Just two weeks after the camp, Jim was killed when a car hit him while he was riding his bike in Destin. He was just 16 years old.

Jim, the son of Dr. Bob and Ellen Hayes, was honored at the fourth annual Fellowship of Christian Athletes camp last year in Brewton with an award named for him.

The Jim Hayes Award will be given again this year to a sixth-grade camper at the end of the camp.

Dr. Hayes will present the award on the last day of the camp to the sixth grader who has been to camp at least three years and exemplifies the pillars of being a Christian athlete and what FCA stands for.

Winton said locally the camp averages 80 kids and it’s growing and is starting to come full-circle now heading into its fifth year.

The local FCA camp is run completely by volunteers who give of their time and effort without pay.

The speakers of the worship/challenge will be announced at camp.

The week’s schedule for the FCA camp is as followed: 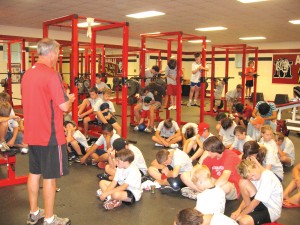