After being in college for five years, former W.S. Neal Eagle Cory Freeman is entering his final season of football at Jacksonville State University.

“I’m on a football scholarship and I have been working towards a degree in Physical Education and will graduate in spring 2011,” Freeman said. “I play tight end and many positions on special teams.”

Freeman said last year was his first year as the starting tight end as a redshirt junior. “Leading up until just a month before the season started last year, I was the No. 2 or No. 3 tight end,” Freeman said. “After a few unexpected events I headed into camp as the starter. I had worked very hard and was excited about the chance to prove that I could step up and help my team win.”

Although Freeman’s move to the starting role came just before the start of the season, he led the team in knockdowns and pancakes with a combined 120, and had six catches for 42 yards.

“I earned second team All-OVC (Ohio Valley Conference) honors last year,” Freeman said. “I’ve been contributing on special teams since my freshman year. Our coaches take pride in special teams and see it as a crucial part of the game.”

Freeman said he went to JSU because they offered him a full ride before he injured his wrist his senior year in high school and only played in six games.

“They stayed committed to me through out the situation when other schools lost interest in me,” Freeman said of JSU. “That meant a lot to me knowing that they still wanted me here. I felt like this was where I was suppose to be.”

Freeman said his favorite memory so far while in college was when JSU beat Eastern Kentucky this past season to become the “Real OVC Champs”.

“We were banned from post-season play this past year and our conference decided that we wouldn’t be able to claim its title,” Freeman said. “As a team we decided not to let that bother us and go out and show everybody what we were made of. At the end of the season it was a great feeling to know what we accomplished as we celebrated in our locker room together.”

Following graduation from college in the spring, Freeman said he wants to be a high school football coach.

“I may stay here in Jacksonville and get my masters while being a graduate assistant,” Freeman said. “Eventually I plan on coming back to coach around the Brewton area. That has been what I’ve wanted to do since I started college.”

While Freeman would like to come back and coach high school football, he said there are many differences in the game of football from a college level versus the high school level of play.

“In college, everybody on the field has talent,” he said. “That’s not how you win. You have to outwork your opponent. There is so much more film study and game planning that goes into every week. You have to be mentally prepared for everything the other team is going to throw at you.”

While there are the changes from high school to college, Freeman’s advice to any high school player wanting to play college ball would be to listen to your coaches and your strength coach.

“They are there to help you,” Freeman said. “Work hard in the weight room and try to perfect your technique on the field. Keep your grades up because you can’t play if you aren’t eligible.”

Nicholson signed a scholarship back in the spring to join Freeman at JSU.

“Hopefully Jeremy will be able to come in and contribute on special teams with his speed,” Freeman said. “You never know, he could see time at receiver as a freshman if needed. From what I know about him he’s a great athlete.”

Freeman said with Nicholson joining the team this season, he would actually be the third player on the team from W.S. Neal.

“Justin Howard, a 2007 graduate (of W.S. Neal) is also playing tight end for us. We are pretty much like a 1-2 punch at tight end sharing time. The coaches have given us the nickname ‘Brew Crew.’ He’s my best friend up here and also my roommate. We push each other trying to get better. Its awesome when I see him make a great play or when I make one and he’s there cheering me on. I really enjoy playing with him and I know Jeremy will fit right in.”

With the past season being on probation, Freeman said this year their post-season ban has been lifted and the team plans on making a deep run in the playoffs.

“I’ve played football since I was 9 and I’m still looking for my first championship ring,” Freeman said. “We start the season in Oxford, Miss. playing Ole Miss. I’m really excited about the chance to play an SEC (Southeastern Conference) school.” 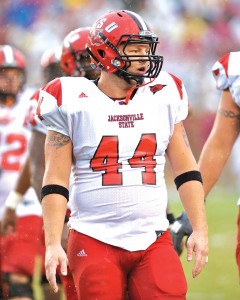