Back on track?: WSN track team to hold 5K to help repair track

On Saturday, July 17, the W.S. Neal track team and Brewton Area YMCA will host the Inaugural Blueberry Chase 5K Run/Walk with proceeds being used towards repairing the track on the campus of W.S. Neal High School.

“The track was damaged a few years ago by someone driving a construction vehicle over about 10 meters of it,” Eagle track coach Rebecca Jordan said. “The area was filled with concrete, instead of rubber surfacing, making the track uncertified by the Alabama High School Athletic Association to host home track meets.”

Jordan said this past season, W.S. Neal’s track team had more student athletes than any other W.S. Neal sports team.

“Unfortunately, we are also the only team that cannot host home meets, or compete on home turf,” Jordan said. “Our sports program has the drive, ambition, and talent to be successful. We just do not have the proper facility. At this time, W.S. Neal High School and Escambia County Board of Education can not give any money towards the track repair, that may cost as much as $12,000.

That is where the Blueberry Chase race event comes in.

The race will start and finish at the Brewton Area YMCA and door prizes and age group awards will also be given. Runners and walkers are welcome, and refreshments will be provided afterwards.

“I am also encouraging all businesses to donate to our cause,” Jordan said.

This past year was a season in history for the W.S. Neal Track Team, Jordan said.

“We had 12 athletes to compete in Gulf Shores for a 4A state title.  Out of those twelve athletes, we had two state championships, and one third place.  Jeremy Nicholson set a State Record (since 1996) in the 110-meter hurdles, and Bob Elliott won the state championship in the triple jump.  Bob also received third place in the high jump.  He recently signed a track and field scholarship at Samford University.”

Jordan also said the remarkable thing about the team’s successes is that all took place on opponents’ tracks.

“Until the track is repaired, W.S. Neal athletes cannot compete at home, due to AHSAA regulations,” she said. “We are the only team at W.S Neal High School that does not have the opportunity of competing at home.”

Jordan said area businesses can help as she has set up three tiers of sponsorship: Gold ($500), Silver ($250), and Bronze ($100), but any donation would be greatly appreciated.

“Your business’s name will be listed on the back of our race shirt in the appropriate tier column,” Jordan said. “You will also receive publicity at the race, thanking your business for its contribution.  More importantly, you will have the satisfaction of knowing you helped our community’s young athletes.” 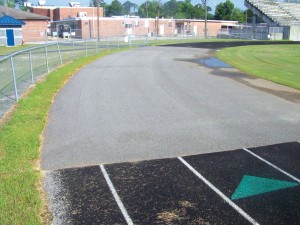 Adam Robinson | The Brewton Standard The section above on the W.S. Neal High School track was damaged and repaired incorrectly. The damage has caused the W.S. Neal Eagle track team to have to compete in track meets at other schools. A 5K race will be held to help raise money for track repairs.