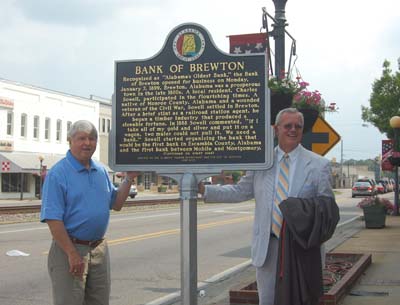 The city’s namesake and the state’s oldest bank were honored Friday as Brewton leaders kicked off the city’s 125th anniversary weekend.

A laying of the wreath ceremony was held Friday morning at the burial site of Brewton’s namesake, Edmond Troupe Brewton. The grave is located at Pilgrim’s Rest Cemetery, which was recently named an historical site on Alabama’s historical registry.

Friday afternoon, a special historical marker was unveiled in front of Bank of Brewton, which is not only Brewton’s oldest bank but is also Alabama’s longest-operating bank under the same name.

Brewton Mayor Ted Jennings spoke to those at Pilgrim’s Rest Cemetery about the honor of recognizing the city’s namesake.

“We come today to pay homage to our namesake, Edmond Troupe Brewton,” Jennings said. “It gives me some personal energy to be here and feel what the people interred here felt as they went through their life.”

Community Development Director Steve Yuhasz said honoring Brewton is one way to continue to look forward in the community.

“It is an honor to be here to remember the namesake for our city,” Yuhasz said. ‘Our present is precious and our future promising. Neither would be so great without the rich history of our past. And we remember that today.”

Laying the wreath at the grave of Brewton was a descendent of the family, Robin Brewton. His wife, Jo, accompanied him during the ceremonies.

Yuhasz said the future of the community is up to the people who work and live in the city and the surrounding area.

“The torch now has been passed to all of us,” Yuhasz said. “May future generations be able to say we were faithful and responsible and left the community in better shape than we found it.”

In an afternoon ceremony downtown, several citizens and leaders gathered to pay tribute to the longevity of the Bank of Brewton.

The local financial institution was honored with the unveiling of an historical marker located near the current entrance to the main offices of the bank.

Yuhasz said the honor bestowed upon the Bank of Brewton was well deserved because of employees’ dedication to the community they serve.

“The City of Brewton has prospered for a long time,” Yuhasz said. “The chief factor in that prosperity is the quality people who have established and maintained strong institutions such as the Bank of Brewton.”

Jennings said the historical marker was made possible through the “Small Town, Downtowns” program across the state.

“When we agreed to participate in the ‘Small Town Downtown’ program we were allowed to pick one institution to recognized with a plaque,” Jennings said. “There was no doubt who we would pick. It was a unanimous decision to choose the Bank of Brewton. We are proud to unveil this plaque today.”

Eddie Nall, a vice president with Bank of Brewton, gave a history of the institution that opened for business Jan. 7, 1889.

“Business was conducted in a small building on West St. Joseph Street,” Nall said. “That was the former Brewton Office and School Supply building. In 1912 the bank moved out of the small building into the newly constructed bank building adjacent to the Lovelace Hotel. In late 1957, Bank of Brewton purchased the Lovelace Hotel. The hotel was renovated and Bank of Brewton opened for business in the new location in 1964.”

The bank remains in operation in the building it has maintained since 1964 in downtown Brewton.

Nall said the vision of the Bank of Brewton has remained the same over the years providing needed services to the community it serves.

“For 121 years we have tailored our business hours and services toward the convenience and needs of the community,” Nall said. “Home owned and operated, we are pleased to meet the financial needs of our community.”