You learn something new every day

Morning Brewton area sports fans and welcome to today’s installment of Adam’s Sports Spot blog. Hope everyone is doing well and has a great day today.

Yesterday was a special day for one local athlete in the Brewton area.

Nelson is the fifth 2010 senior from T.R. Miller sign an athletic scholarship if my figuring is correct. Also, if my figuring is right, along with W.S. Neal’s two signees this year, the seventh athlete to have signed a scholarship this past school year to continue their play at the next level.

Congrats to Nelson and to all the athletes who have done this.

Now to the main part of today’s blog and reason behind the headline.

As I was waiting around in the T.R. Miller field house yesterday at Brandon’s signing, I was just looking over some of the pictures and memorabilia of T.R. Miller football history on the walls.

I have been in the building several times and love looking at the history. While something new usually catches my eye, yesterday was no different.

I came across a frame with some things in it with a little writeup out beside it and the headline caught my eye.

The headline of the article was “T.R. Miller High School Black and Gold Tigers.”

The gold “M” in the picture  belonged to Pete Scott. Scott won the letter as a member of the 1929 football team and was donated by his daughter Ann.

The article beside the 1929 team picture and “M” in the picture said that before T.R. Miller became red and white they were indeed black and gold. Ben McLeod who came to coach T.R. Miller in 1937 was a graduate of the University of Alabama.

He changed the colors to dark red (crimson) because it was Alabama’s colors. T.R. Miller remained the Tigers.

In the 1950s, T.R. Miller’s colors became a true red and white and had some black on their jerseys in the early 1960s.

The story goes on to say that a black stripe was added to the pants of the Tigers uniforms in 1973 and some form of black has been part of the color scheme since that time.

Just a little side note about the black jerseys T.R. Miller wears.

I just thought that was interesting. If anyone has any more news or interesting facts or anything they would like to share or have me write about or try and research, just comment on the story or shoot me an email.

Until we meet again here or out in the world of sports, God bless. 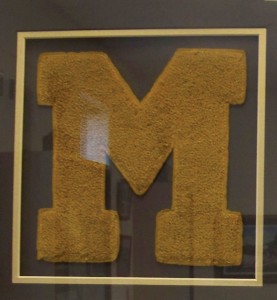 Here is a picture of the gold "M"