An unfortunate planning error will result in new pavement for residents at the end of Dogwood Lane.

Russell Holland, project manager with CDG Engineers and Associates of Andalusia, said the error would be “made right” for the residents in the area.

“Our original plan was to pave Dogwood Lane to the bridge,” Holland said. “However, the remaining portion of Dogwood was prepped for paving by mistake.”

A group of residents who live beyond the bridge on Dogwood Lane gathered under the trees along the street Monday afternoon to voice their displeasure with the paving issues for the street.

Cindy Baggett, a resident at the end of Dogwood Lane, expressed her anger over conflicting information regarding the paving of the street.

“These people came in and stripped the asphalt from our end of the street and slagged it,” Baggett said. “We were told they were going to pave it but then they tell us they aren’t going to pave it. I want some answers and I want this fixed.”

Holland assured the residents at Monday’s impromptu meeting that the prep work on the street had put the area in better shape than it was before the error was made.

“We didn’t take any asphalt up,” Holland said. “We put down a (prep) material that actually has the road in better condition than it was before from an engineering standpoint.”

Courtney Jordan, a resident of Dogwood Lane, said she had lived on the street for 20 years and had seen many issues concerning work in the area. “To say that road is better than it was before is not right,” Jordan said Monday. “It’s worse than what we had. Now we’re going to pay for your mistake.”

Holland took responsibility for the error and set about making sure residents were satisfied in the end. “Please allow me some time to talk with some folks and see what we can do to make things right,” Holland told the residents Monday.

Holland told the residents the city was not allowed to pave privately owned streets but would check to see what could be done.

On Tuesday, Holland met with officials with his company and the City of Brewton to make a determination on how the issue could best be settled.

“After meeting with some people today we have decided to resurface all of Dogwood Lane,” Holland said. “We will do that at no additional charge to the city. We stand behind what we do, and we want to make things right for the residents in the Brewton area.”

Additional work will take a relatively short time to complete since prep work on the area now set to be paved had already been done, officials said. 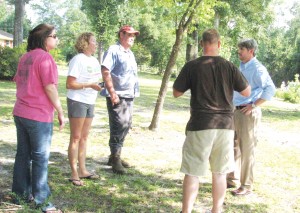 Lisa Tindell | The Brewton Standard Residents of a portion of Dogwood Lane gathered along the roadside Monday to voice concerns over paving issues for their area of the street. Project Manager Rusell Holland, far right, met with the residents to find a solution to the problem. Cindy Baggett, second from left, was vocal about the lack of paving along the street at her home. Other residents, including Courtney Jordan, left, expressed concern as well.